Every Sunday I check my calendar for the week to see what appointments or engagements I have lined up. This past Sunday morning my week looked wide open and frankly pretty dull. It's funny how quickly things can change. Sunday evening I got a message from my dear friend, Athena, that she would be having grand children on Monday and would I mind if she brought them over to see the alpacas. I was so pleased to hear from her and, of course, I love to have the opportunity to show off the animals to little kids. So late Monday morning, Athena, pulled into the driveway loaded down with three kids and a large bag of produce from her garden.

Athena's grandson, Joel, and her granddaughters, Caroline and Molly, are such sweet  and well behaved children. All three were curious about our little shop and the animals. Of course, the two little alpaca boys did  not disappoint. They always put on a good show. Caroline, the middle child, immediately took to the animals and was very comfortable around them. Little Molly, the youngest, liked the alpacas but with a two-year-old's attention span, didn't focus long on any single animal, but was curiously wandering all over the barn yard. 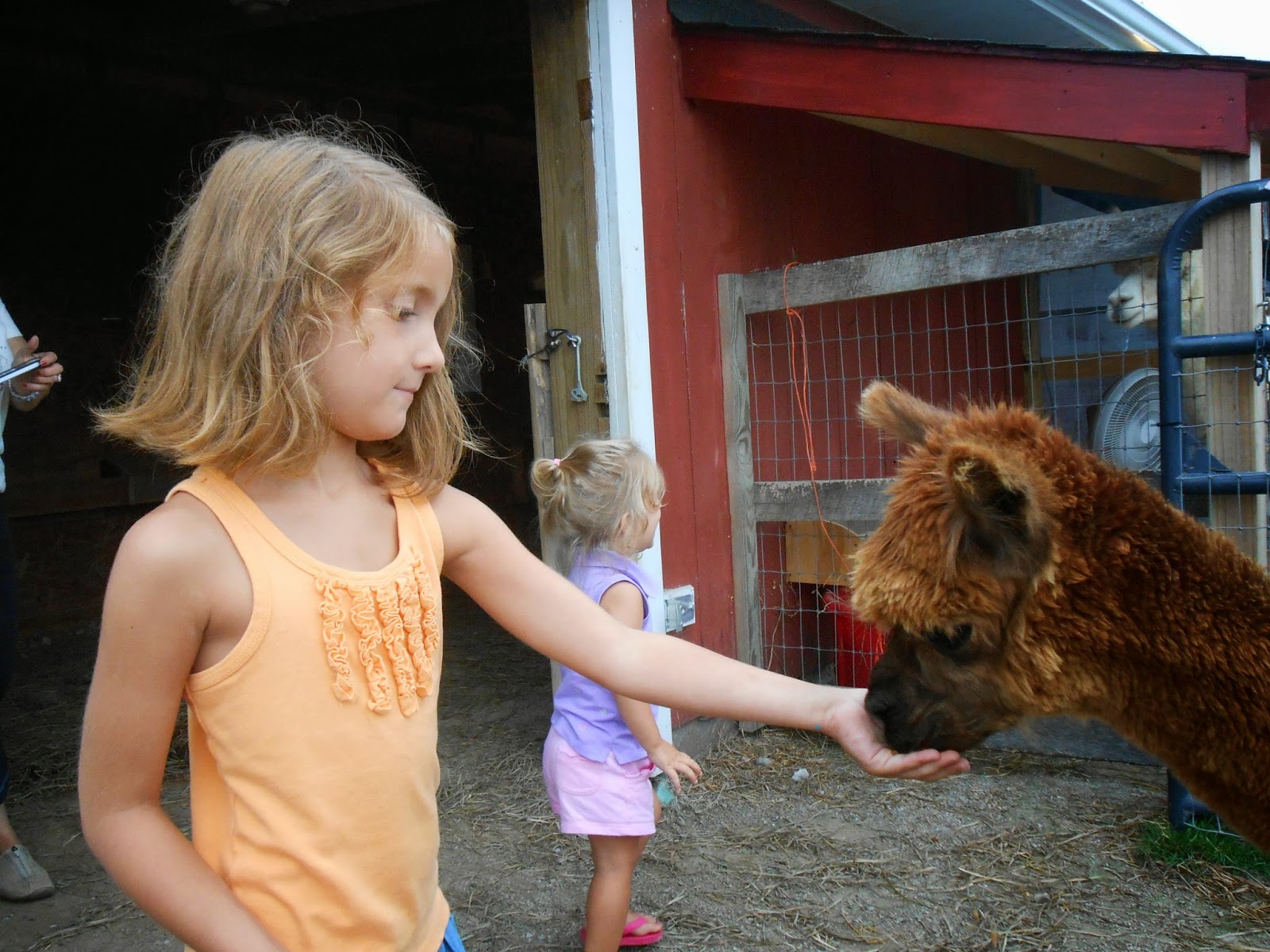 Joel freely admitted that he preferred cats to larger animals and was a bit hesitant to feed Brutus and Asterius. Once he became a bit more comfortable around the alpacas we did convince him to extend a hand to feed Brutus long enough for me to get a picture! 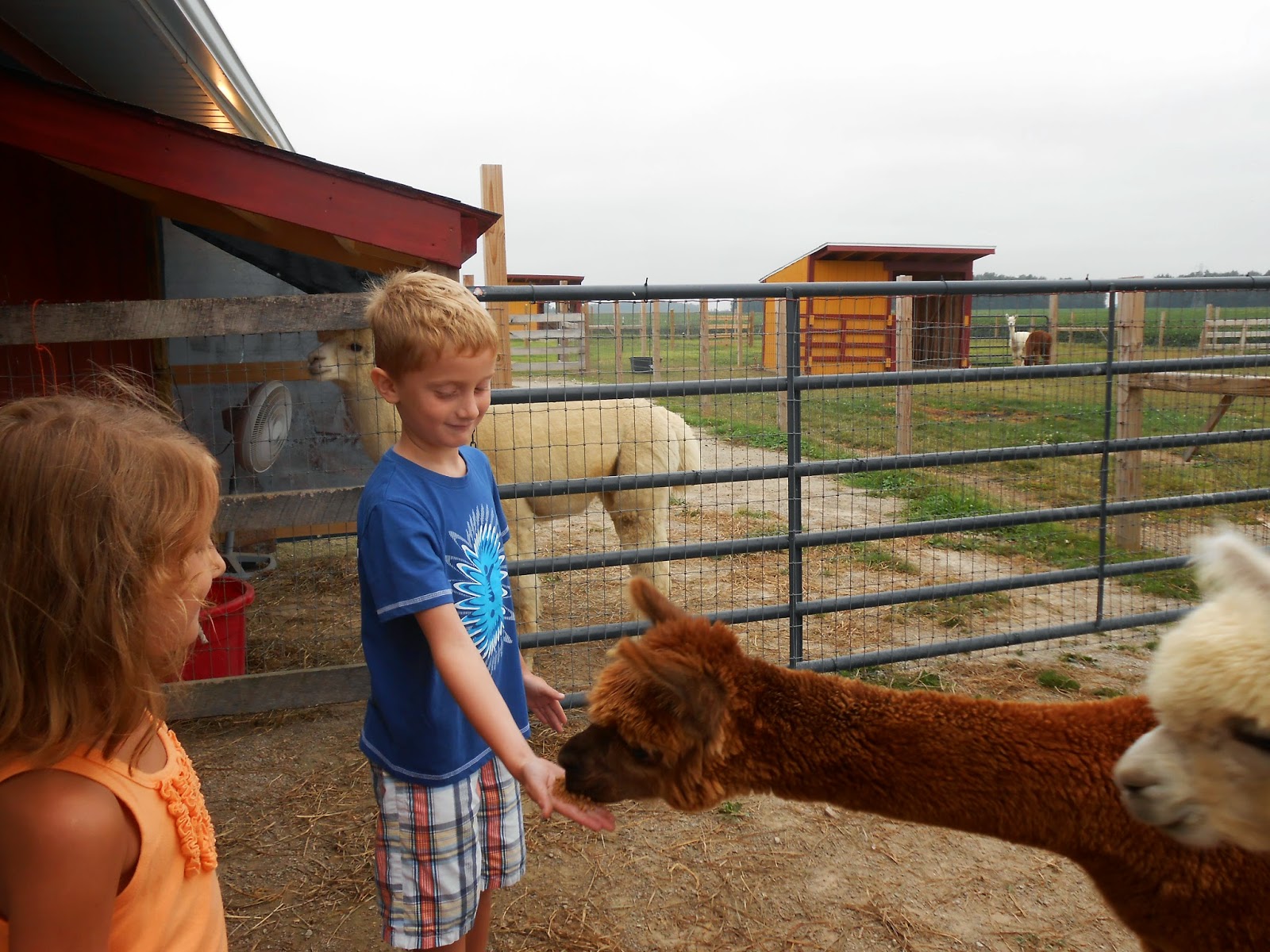 Athena took far better pictures than I and has them posted on Facebook. Since she tagged me in them you can view most of them on my page. 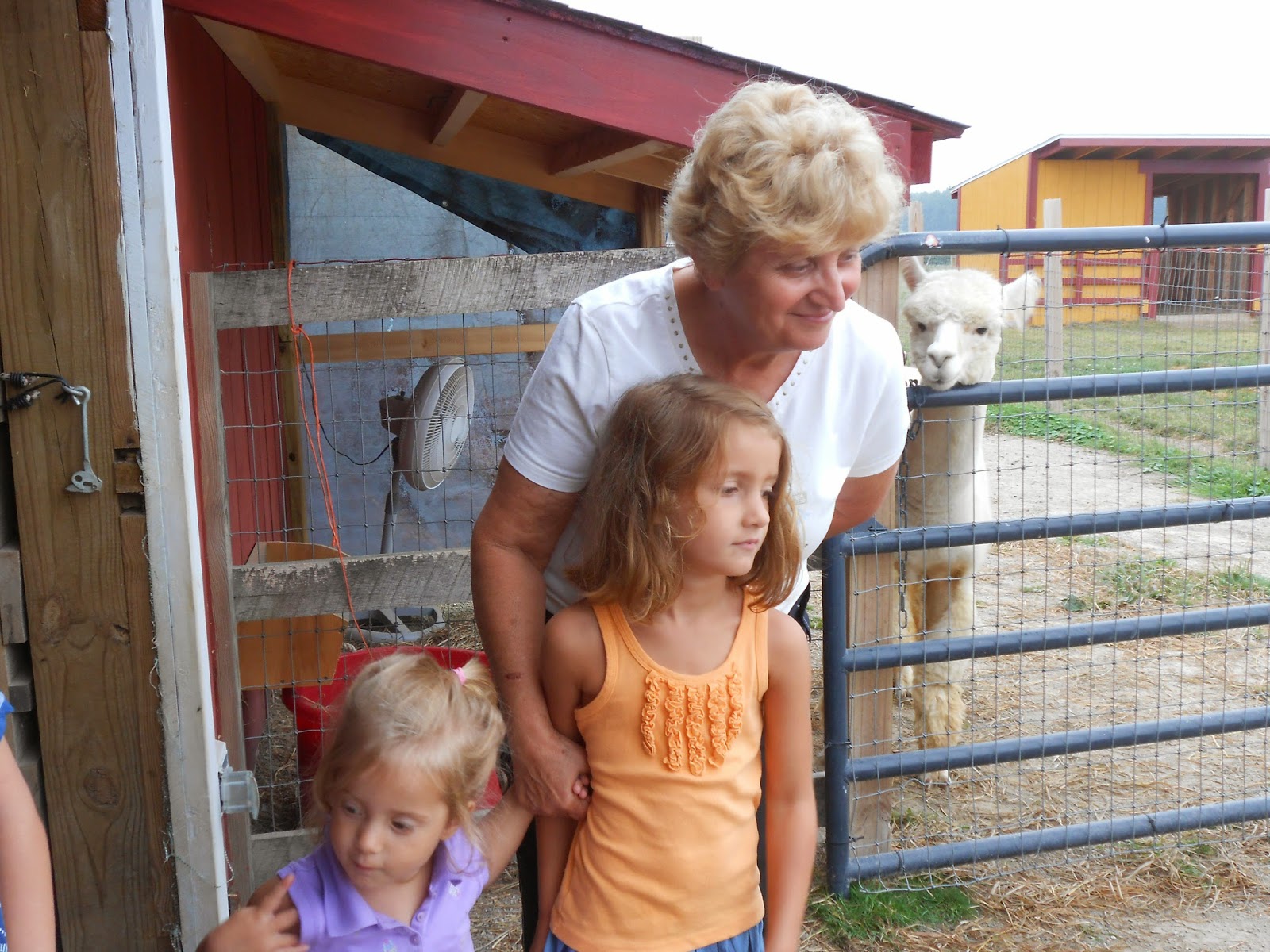 The only problem with our visit is the same one we always have. Our visits are infrequent and don't ever seem to last long enough. (Yes, I know you are reading this, Athena!) But when it's nearing lunch time and you have three kids clamoring for lunch at McDonald's adult conversation, of necessity, gets put off for a later time. I so enjoyed our time together and I am also enjoying the fresh produce. The banana peppers got sliced into pickling brine that same afternoon. 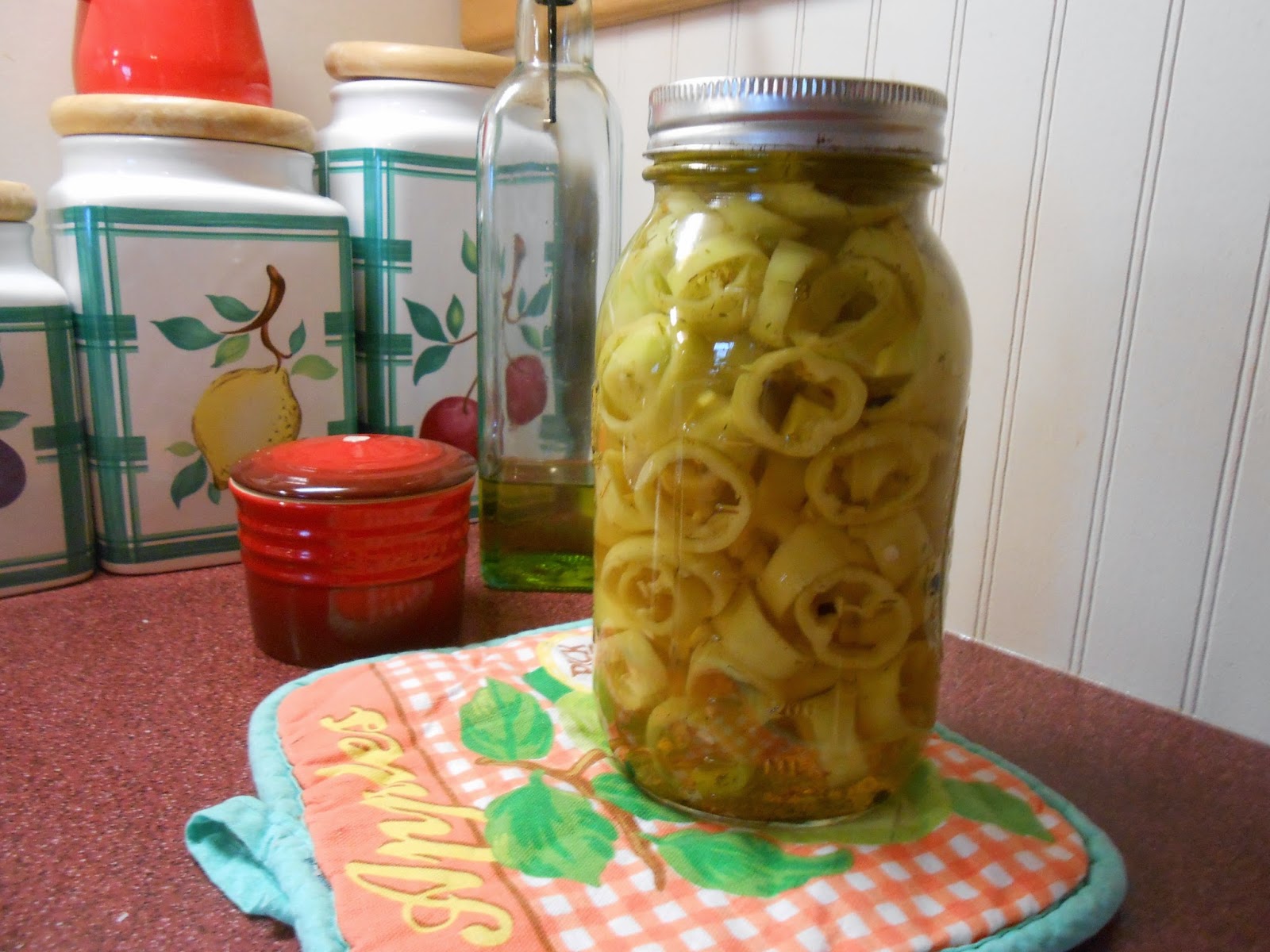 This afternoon I was working in the store, painting an "Alpacas for Sale" sign and applying price tags to the last batch of yarn, when I got a phone call from one of my favorite former students, Austin. He and his friend, Maddy, another favorite of mine, wanted to stop out for a visit. I must confess I was so pleased to hear from these two and have been hoping to see them again soon.

They got to see the alpacas for the first time. 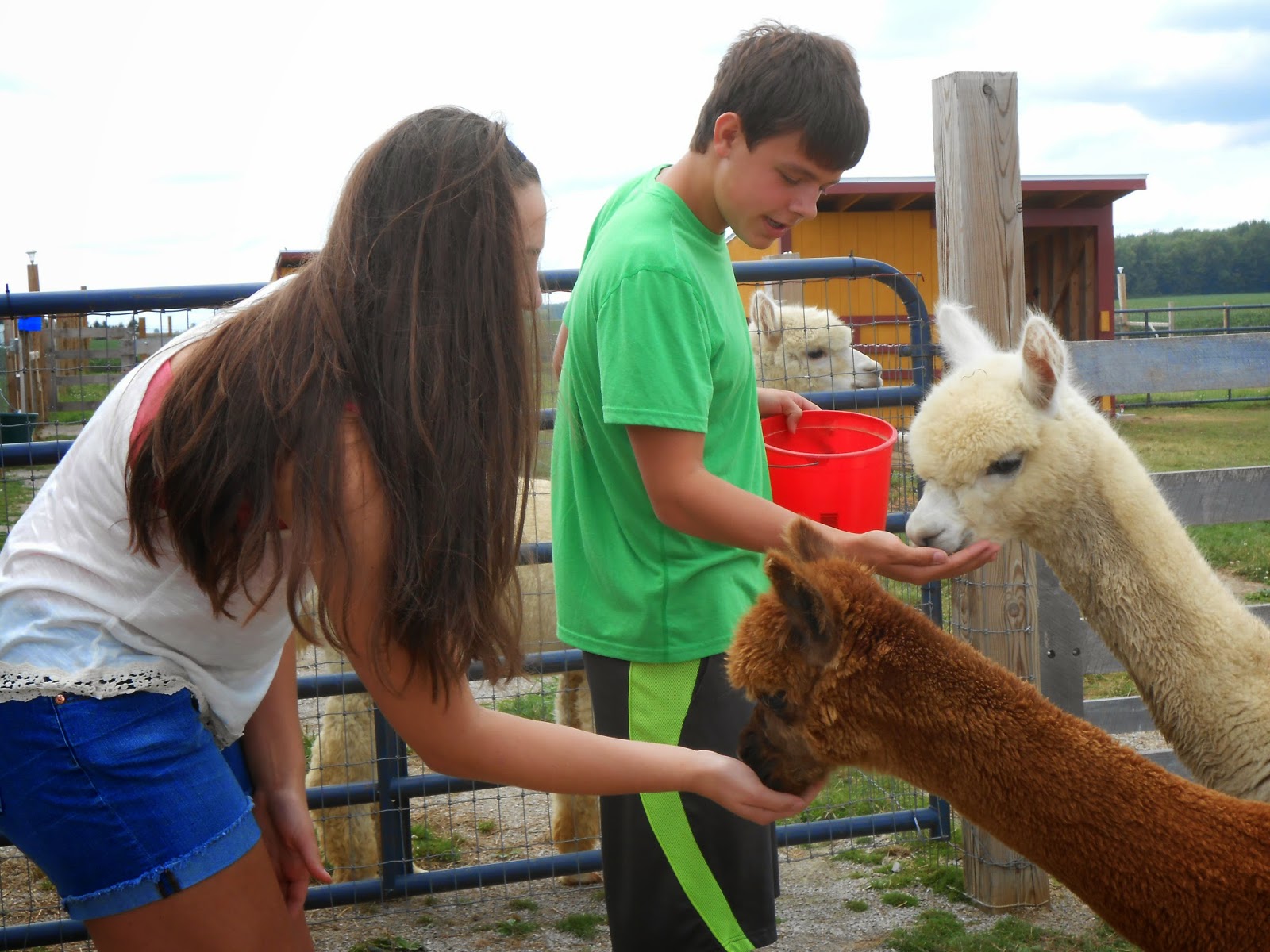 I showed them around our little store and then we sat out on the front porch of the store to catch up on all that they have been doing for the past three years. I had them in my class for seventh grade and of course saw them every day for the following year when they were in the same school as eighth graders. Other than following them on Facebook, I hadn't had the opportunity to sit down and talk for the past two years. Both have matured so much in the interim and are just ready to begin their junior year. We chatted outside for an hour and had to move to the house when the wind picked up. It has been raining off and on for the past two days and looked like it might begin again. 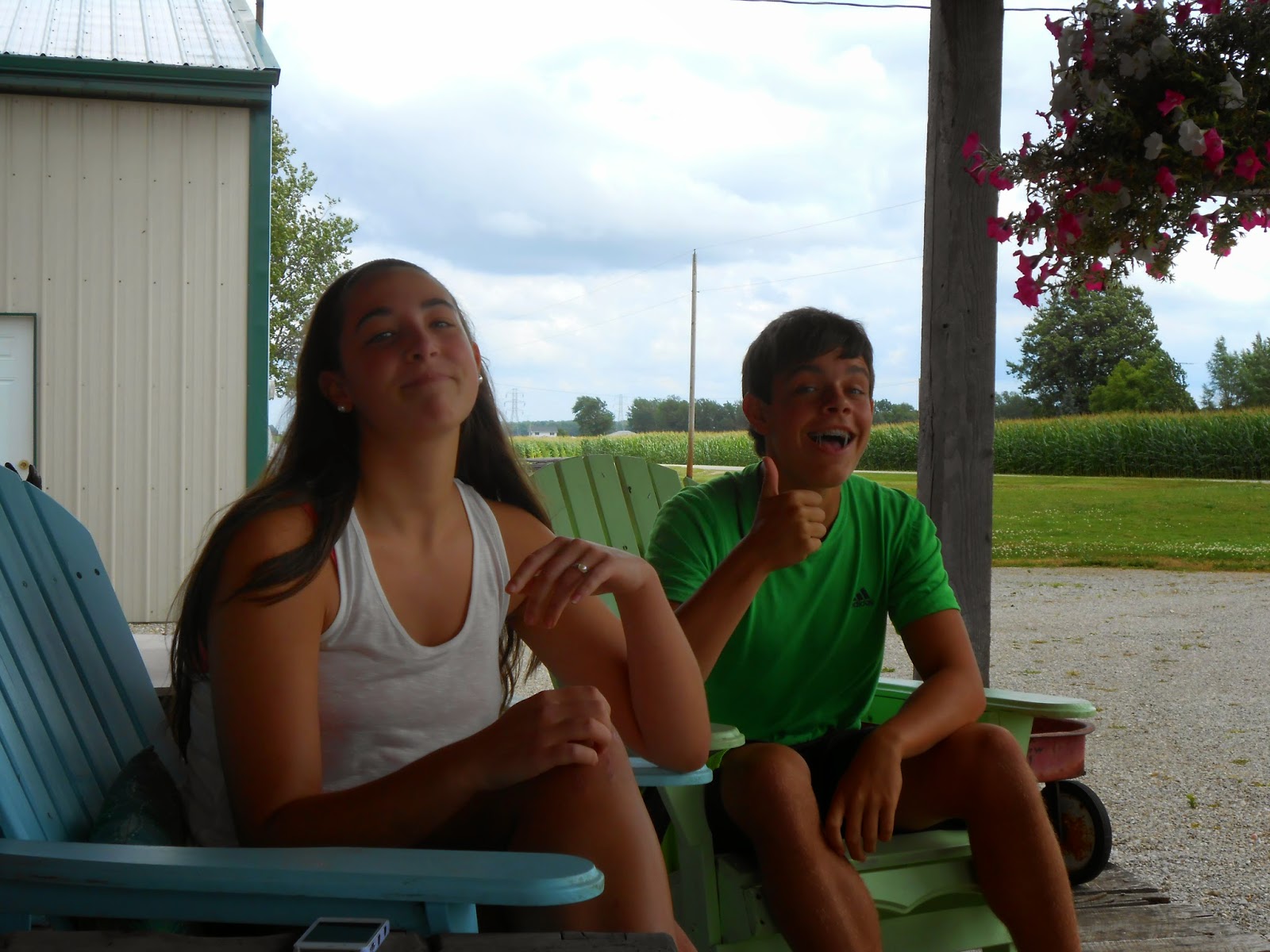 Inside, our conversation moved on to other kids in their class that I knew and have taught. We talked about current events and the fact that Robin Williams had died yesterday. That prompted them to recall the last day of school, after I had shown the movie, Dead Poet's Society, when they all stood on their desks as a final salute to me. One of the few times that students have moved me to tears. From there we discussed their summer reading program and other literature that we had read. They recommended two books to me which I have put on my Nook "wish list" and will read later. It was such a pleasure to hear their points of view on life and literature. The kids and the discussions are what I miss most about teaching.

They departed after a two hour visit with an open invitation to return any time and bring some of the old gang along. This was a group of kids that I remember fondly and have been keeping tabs on from afar because I know that many of them will go out into the world and do good things.
Posted by Buckeye Star Alpacas at 3:00 PM