To Whom it May Concern:

Last night we had 3-4 more inches of snow, sleet, and freezing rain. This morning our county and all of the surrounding counties had a level 3 snow emergency. After Rich and his brother, Danny spent over an hour clearing away the snow in our driveway this morning, the temperature has risen to over 30 degrees and it's still climbing. The remaining snow and ice on the walkways and driveway is melting off and the meteorologists are predicting rain in the coming days. Even with the warm up, the piles of snow left around the driveway from previous clean ups won't melt until June at the earliest. 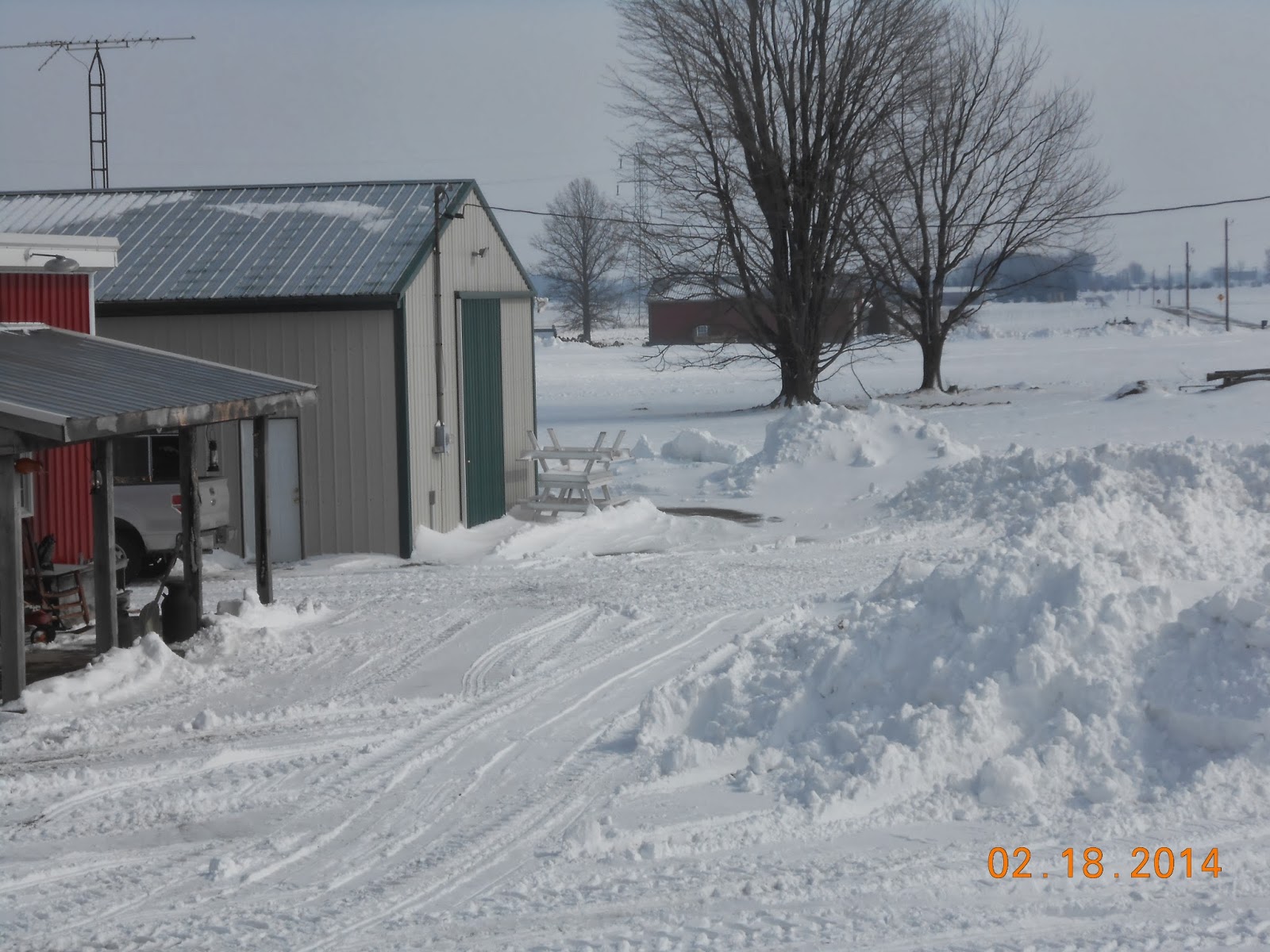 While Rich shoveled the pasture gates and barn doors clear, Danny took the tractor into the main pasture area to clear out a playground for the mamas and babies. The alpacas don't like to walk on the crusty, icy kind of snow that had built up in the pasture. They have bipartite feet with pads, similar to a dog's, and a large toenail on each part. The icy build up must hurt those soft pads. 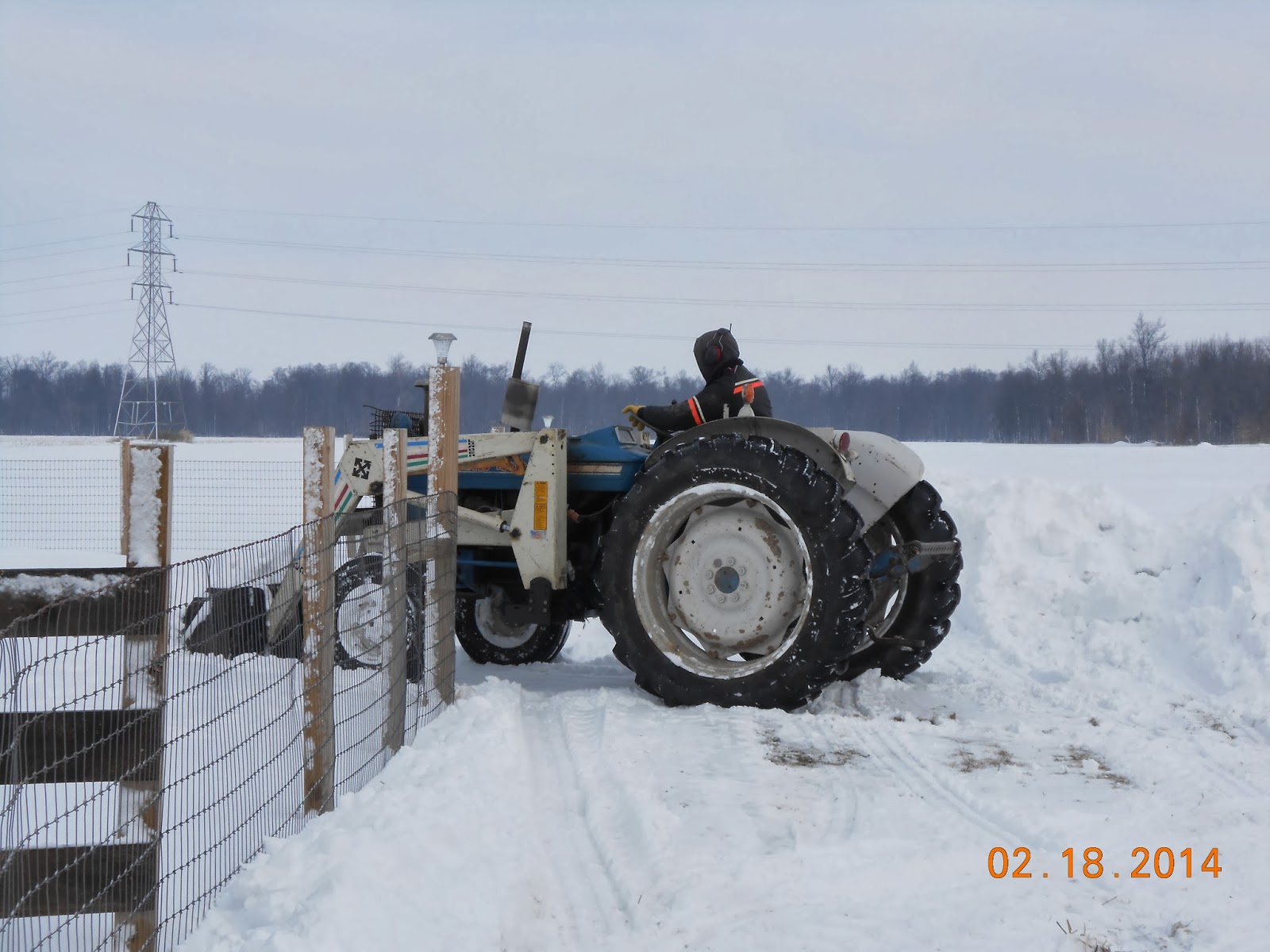 It's not that they don't like snow, per se. Most of the time they sleep in a group right outside in the barnyard and in the morning we find them with snow or frost on their backs. Leezza and the younger ones actually like to roll in the freshly fallen, soft snow. 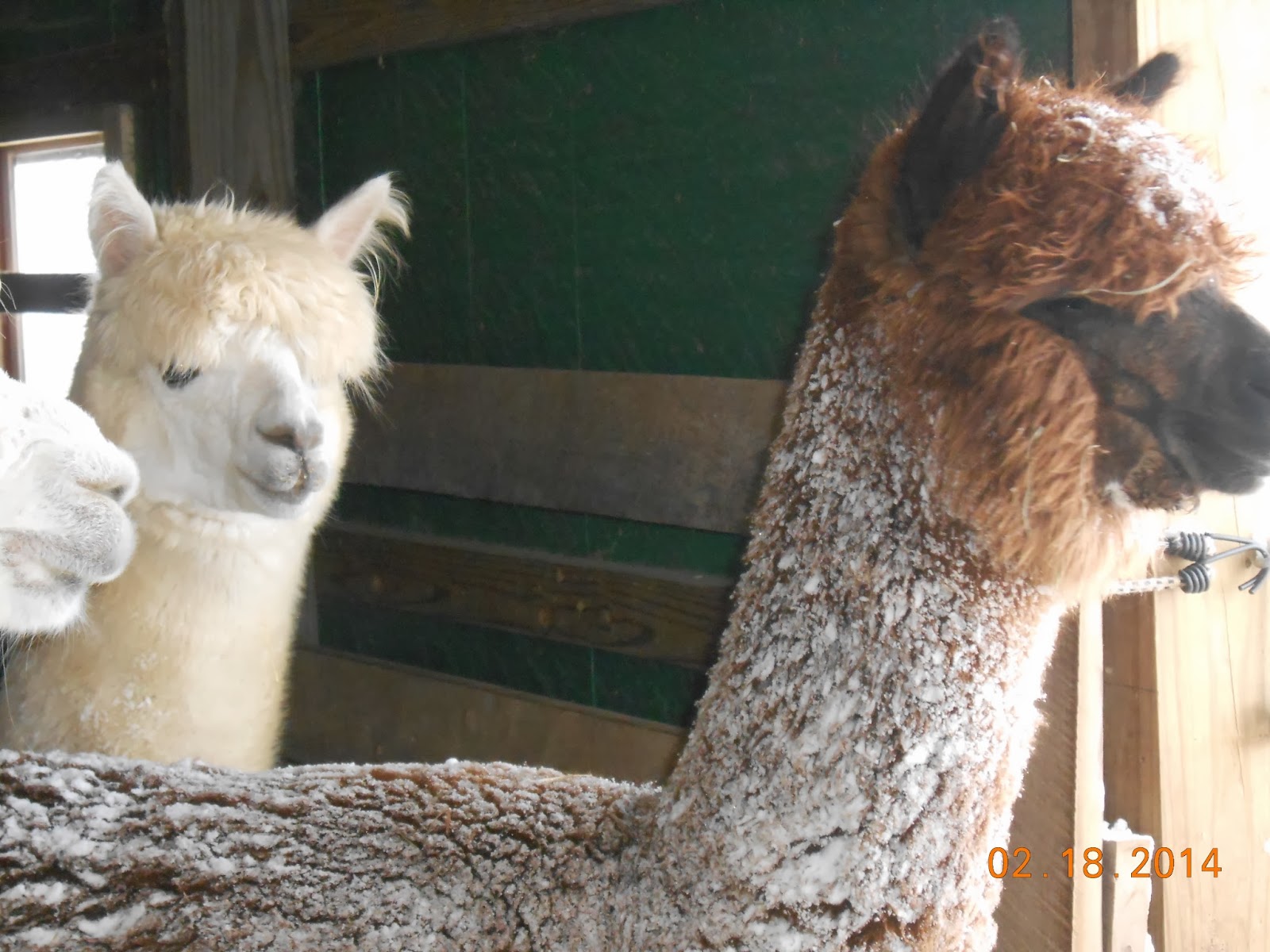 As Rich shoveled around Nikko's gate and cleared a path to his condo for the little man, Nikko curiously poked his nose into Rich's back and generally got in the way. His behavior is more amusing than bothersome and it made us laugh to see him follow the path of Rich's shovel and the flying snow as it was heaved over the fence. 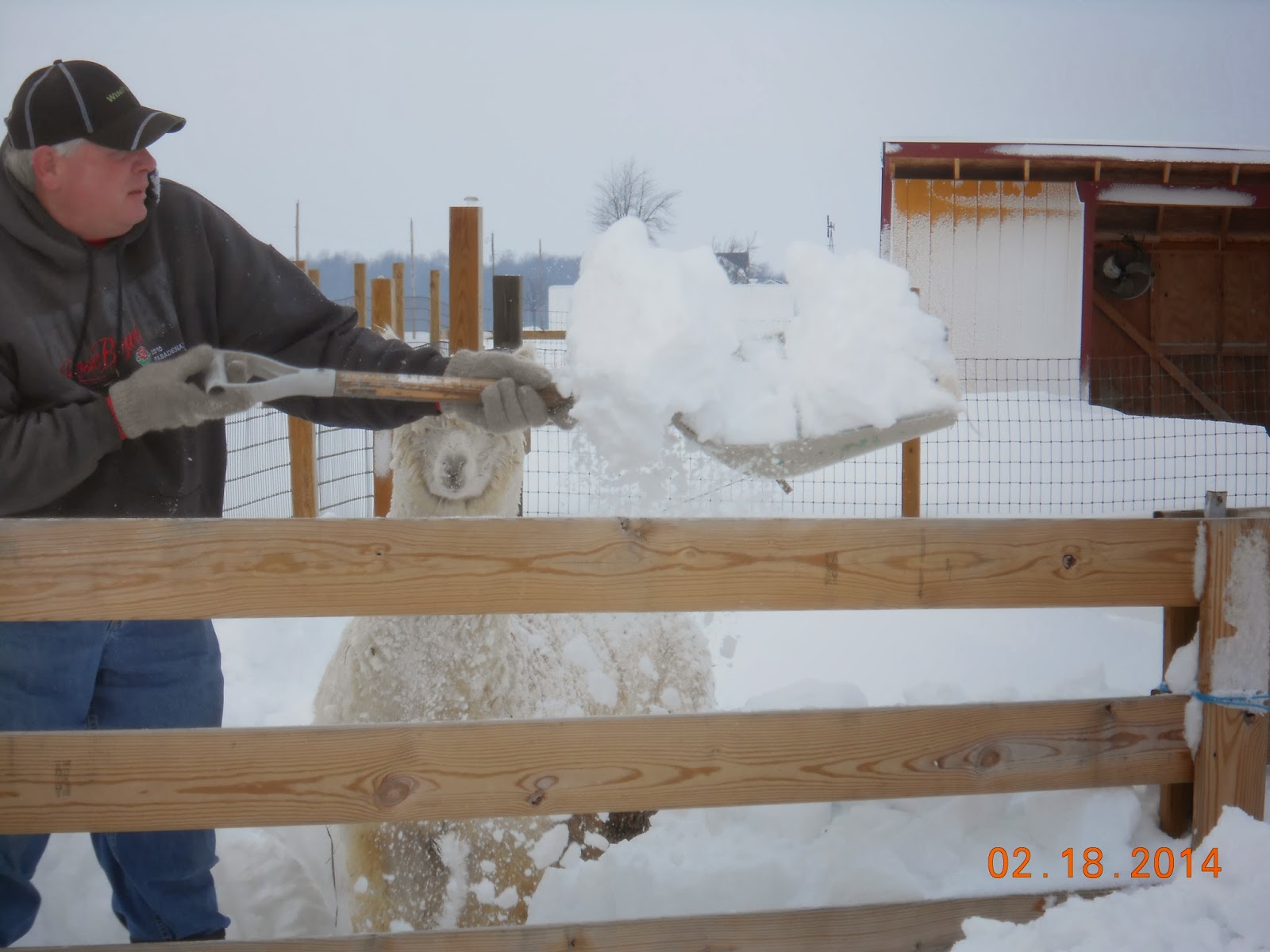 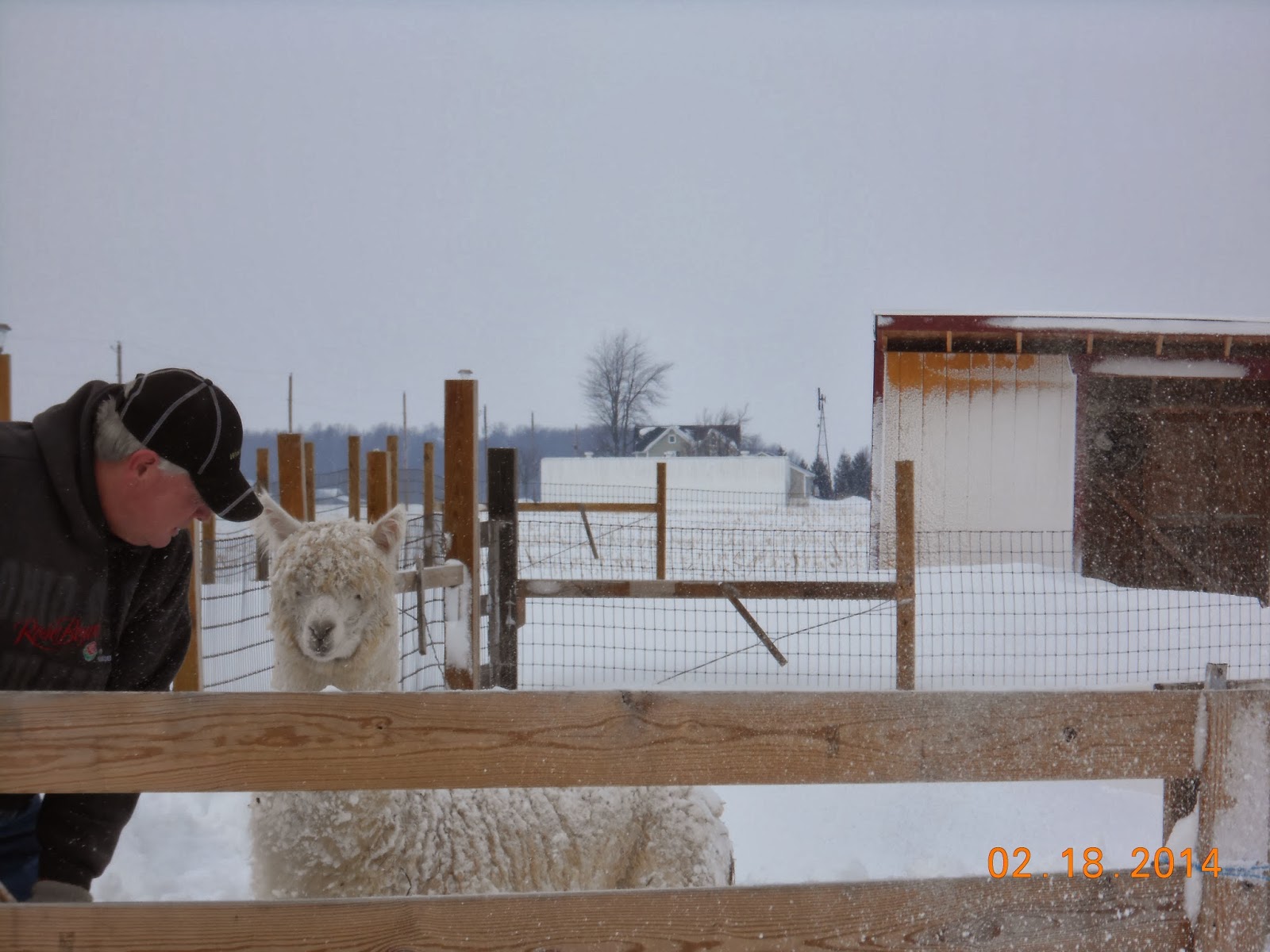 Once Danny and Rich had finished working in the pasture we released the girls and babies from confinement in the barn. They rushed en mass into the pasture where they stood looking around in bewilderment. It didn't take long before Mango was trying to graze in the nubbins of grass that poked up through the remaining snow cover and the little boys, Asterius and Brutus, began wrestling in the snow. Happy animals! 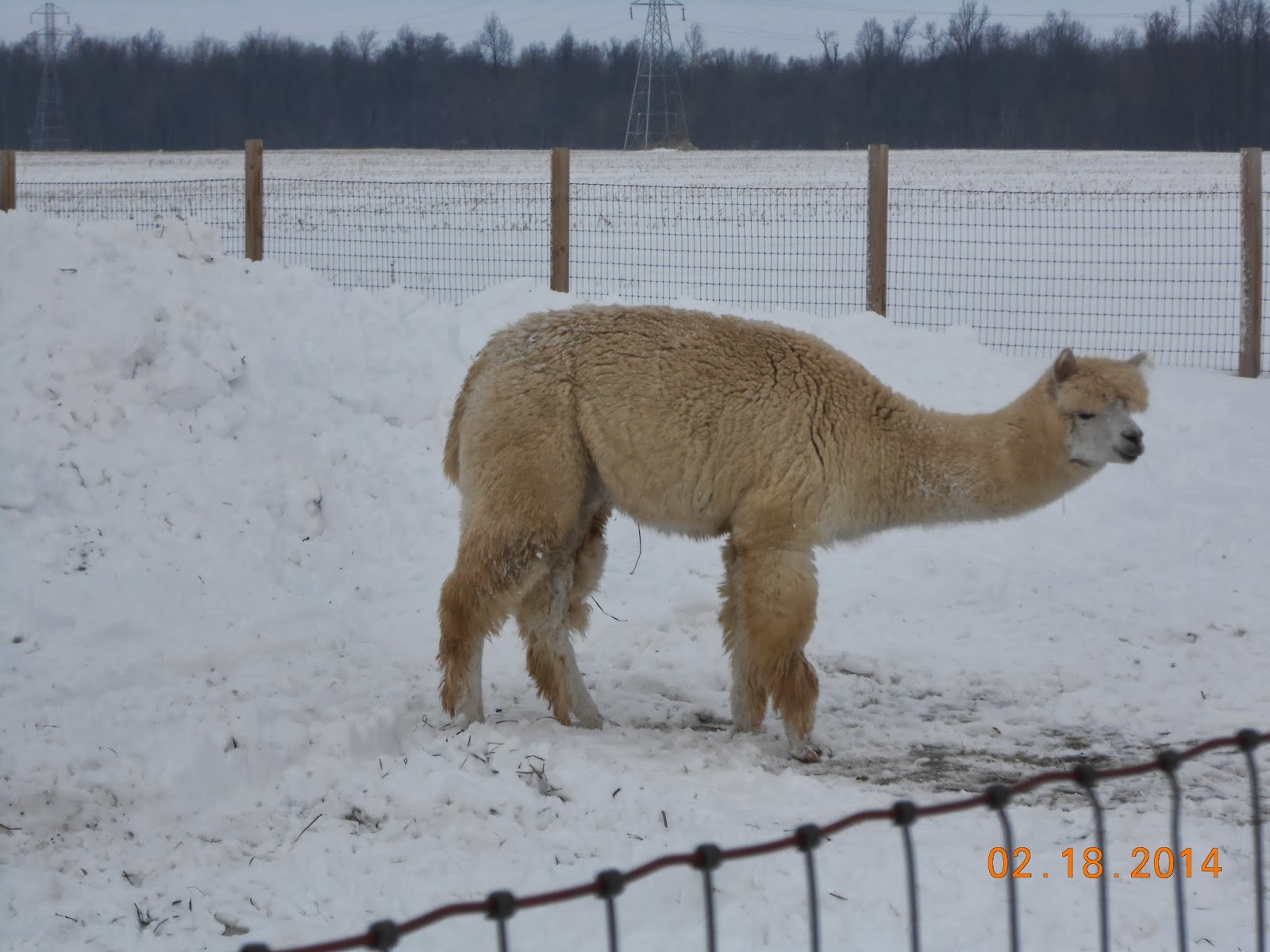 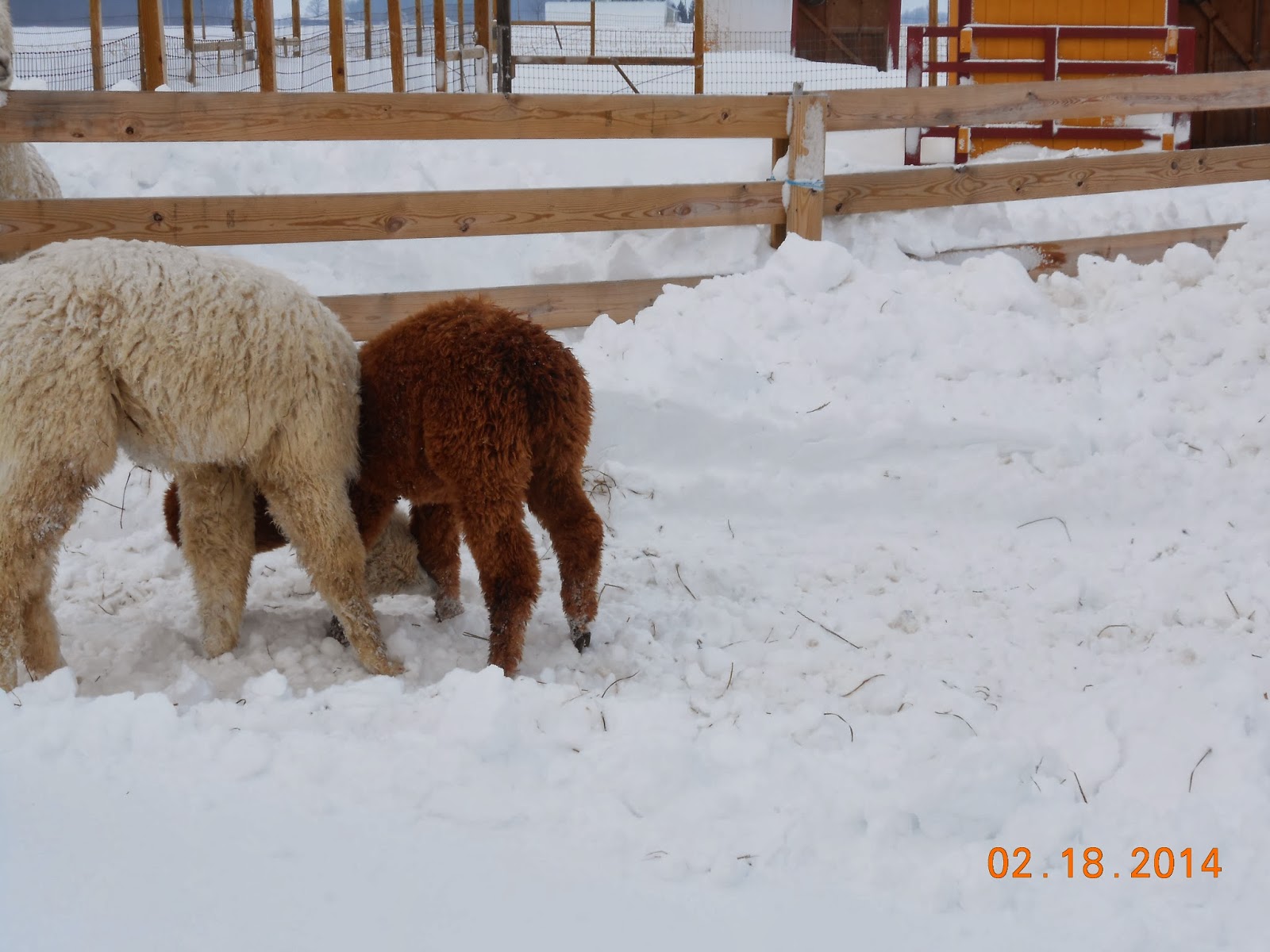 Remember those cute little bunnies that Callie had been making a game of chasing?  I thought it was so endearing that they were hanging out with the concrete garden rabbit in my little hosta/peony garden. They are not so cute anymore. Not since last night when I discovered that they have eaten all of the bark off of our beautiful tree peony. We have been nursing that small shrub through cold winters and summer droughts for the past five years and it has provided us with more and more of the most beautiful, ruffled, pink blossoms every June. I find very little consolation in the fact that they are eating well in such a harsh winter and I very much doubt that the Japanese peony will survive the attack of the killer bunnies. 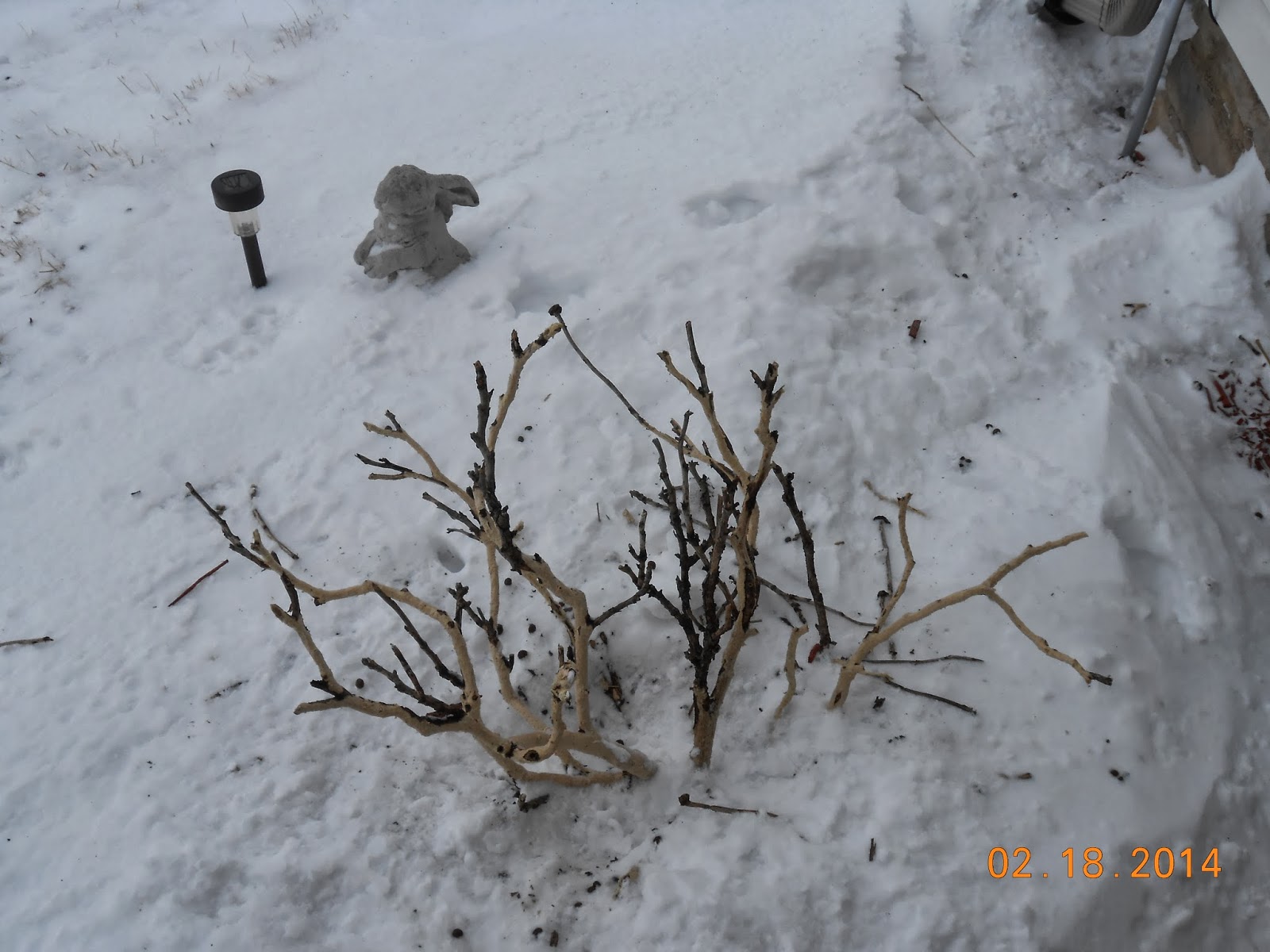 On a more positive note, I drove down and picked up our granddaughter, Olivia, on Friday because she had a scheduled day off school and had expressed a wish to come up and stay. Olivia, grandson, Max, and I shopped at the North Market for some gourmet ravioli to fix for our Valentine's Day dinner. We enjoy the shopping expedition and ate lunch at the market after which I dropped Max off at home and Olivia and I headed north. She had a new recipe for mini peanut butter cup cheese cakes that I helped her prepare for g-pa's dinner surprise. Yummy! 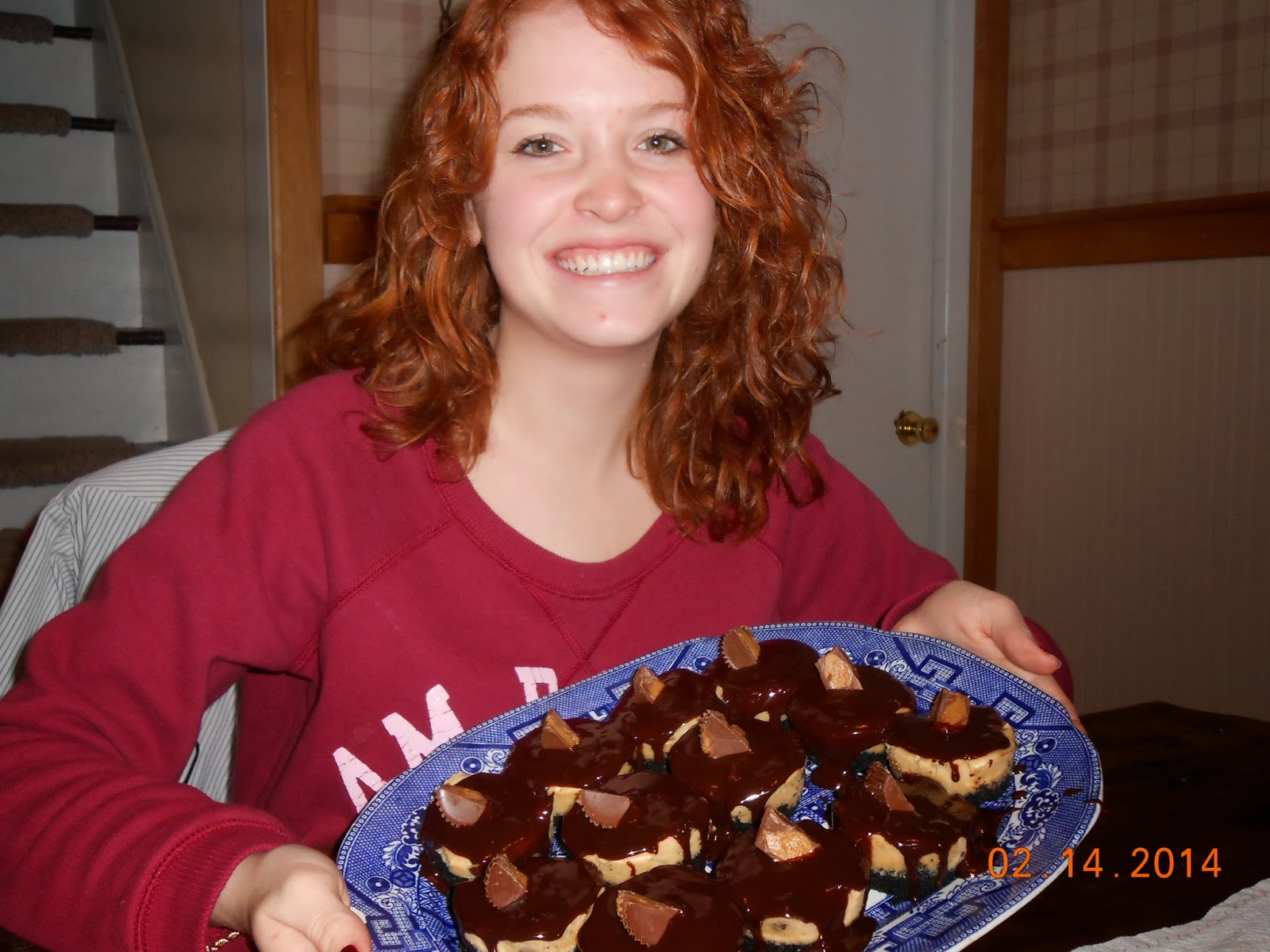 Olivia and I have been cooking and baking together since she was slightly over a year old and could sit on the counter or stand on a stool beside me in the kitchen. She enjoys finding and developing new recipes and serving them up to friends and family as much as I do and we always have a good time doing it. I am a lucky g-ma to have an almost sixteen-year-old granddaughter who still likes to spend time with me.

Posted by Buckeye Star Alpacas at 10:35 AM