Yesterday was sunny and calm outside if a bit cold. The alpaca girls just love being outside in the sunshine and were positively basking in it. 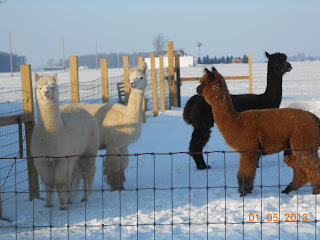 This morning Rich decided was going to be a work day. It was, in fact, time to put baby Mango in a halter and hook up a lead and walk her like a big girl! We anticipated some resistance from mama Took because she is still somewhat protective of her baby. The plan was to corral both of them, hook up Took first and then Mango in the hope that Mango would follow her more experienced mama around on the lead. As luck would have it, Mango was the first one in our path when we backed them into the corner. Rich grabbed her around the neck and I snapped on the halter and the lead. After snugging up the halter a bit I took over the lead and held fast. Mango bucked a bit and then just stood there facing me, the lead taut between us. 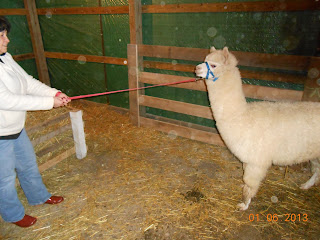 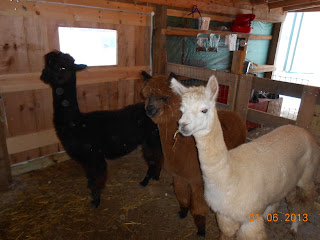 As we faced off, the other three ladies just stood by the door and watched. Took was not distressed in any way and they all were more curious than anything else. It was almost like they were wondering how Mango would tolerate being haltered and led. They seemed to stand by humming their encouragement to her. Mango pulled back and resisted a bit at first. I kept telling her what a good girl she was and encouraging her and she took a hesitating step forward. The two of us did the "resist-step" dance around the barn a bit. When Rich opened the barn door, the other three rushed out and Mango started to rush with them until she realized that I was still attached to her at the other end of the lead. We continued our dance, one step at a time, out into the door yard of the barn and a few feet out into the pasture. This continued for about 15 minutes with Mango becoming more cooperative as time went on until she had finally reached the end of her tolerance. She bucked a couple of times and I ended the lesson. It was a very satisfactory lesson and we will continue to practice with her each week until she is walking the show ring like a champion! 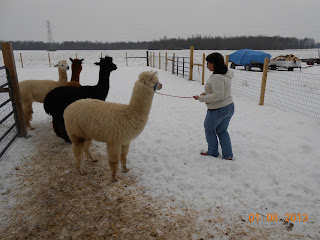