Blogging and Covid-19 and Ireland - Installment IX - The Last

It's the last day of August and school has been in session for a week already. The pandemic is still going strong, although they report that the numbers in Ohio are going down. I don't mind saying that I have been stalled, unable to get much of anything productive done much less blogging. When I realized that this time last year we were getting excited to depart for Ireland, I decided that it was time to finish the blog about the trip (and the pair of socks I began on the trip). Finally the streak of super hot and humid weather has broken and it is pleasant enough to  turn off the air conditioning and open some windows. The sound of crickets and the slight breeze and sunny skies are beginning to hint of autumn.

The Last Leg of Our Ireland Trip

After leaving Kinsale we headed to Kilkenny with a stop along the way at the famous Medieval Rock of Cashel in the town of Cashel in Tipperary County. The Rock of Cashel is known as the seat of the high kings of Munster. It is said that St. Patrick came here to convert King  Aengus. It is here that the legendary Brian Boru was crowned king. It's a majestic ruin, parts of which are under reconstruction and preservation work. The famous high cross of St. Patrick is also located here. The Rock of Cashel stands high above the small town overlooking miles and miles of green fields where sheep and cows graze. We were lucky to see it on one of Ireland's sunny and unusually warm days.

From here we drove on to Kilkenny where we stayed two nights at the Bridgeview B&B. True to it's name the B&B was located directly across from a footbridge that crosses the River Nore. We could watch the local sculling team practicing on the river. From the front of the inn we could see Kilkenny Castle and the old town of Kilkenny. The original Matt the Miller's Pub was just at the other end of the block within easy walking distance from us.

This little detail was important for Rich because this was one of the pubs on his must see list ever since he had seen a picture of it in it's namesake pub, Matt The Miller's, in Dublin, Ohio, one of our favorite places to eat! Of course, the first evening we had to walk down to the corner pub and tip a Guinness or two and dine on fish and chips. As we sat in a little window snug drinking in the atmosphere, we were taken by a portrait of John Smithwick of Smithwick's ale fame. It was a very modern portrait of an historical figure and as we sipped, my peripheral vision fooled me into thinking that John Smithwick winked at me! Closer inspection revealed that the portrait was, in fact, a digital image and the subject periodically changed position and with an ornery looking smile did indeed wink. This was almost as fascinating as the old pub itself.

We awoke the next morning in our sunny, blue bedroom in the front of the house. We could see moms walking their children across the bridge to the school on the block behind the b&b and hear their happy chatter. Emer, the owner and cook made me a  lovely breakfast of Irish porridge and good strong coffee. Thus fortified we headed over to the Kilkenny Castle in order to be there as soon as it opened and beat the crowds. Kilkenny Castle is over 800 years old although due to renovations and remodels by the various occupants through the years, what you see today is mostly a Victorian version inside.

I strongly recommend that you wear study walking shoes since the tour takes you through what seems like miles of hard stone corridors. Rich was feeling the long walk in his back and I in my knees by the end of the hike. It was well worth it and quite impressive in its opulence. My favorite room was the great portrait hall that held portraits of all the important past occupants of the castle.
At 3:00 we had an appointment to tour Cushendale Woolen Mill in Graiguenamanagh, Co. Kilkenny. I had made this appointment months before our trip and was really eager to see the operations. The original mill had been established in 1204 by Cistercian monks and the Cushen family has operated a mill on the site since 1778. Philip Cushen, a descendant of the original Cushons is the current owner and he gave us a personally guided tour of the mill operations. Using only fiber from Irish sheep they create some of the lovliest yarns and fabrics. They are still using a spinning "mule" from the 1800s. 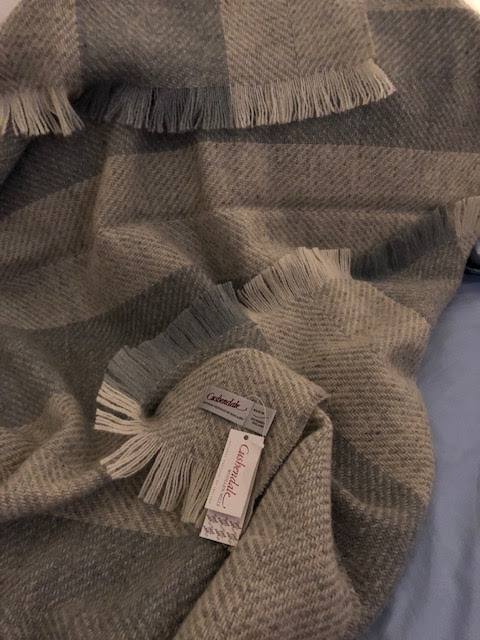 After a quick lunch in Graiguenamanagh we headed back to Kilkenny and wandered around town, stumbling on The Smithwick's Experience. Although they actually brew their ales at a much larger location, the informative tour takes place at the original brewing site. 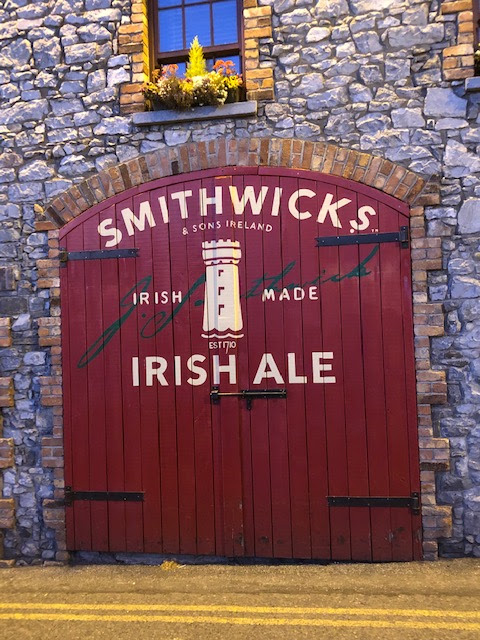 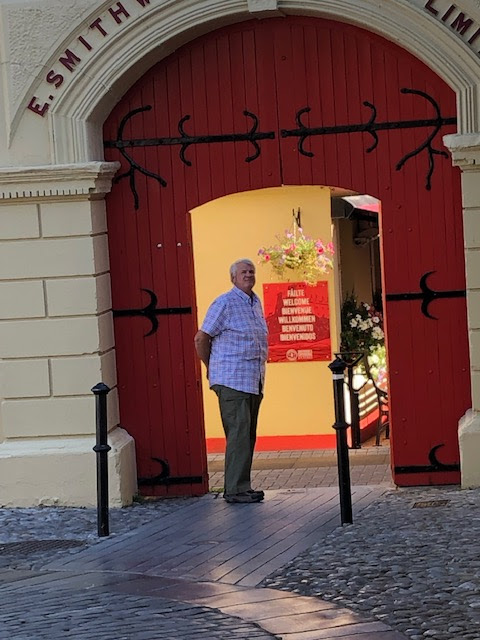 Monks had been brewing ale in this area for 300 years before the reformation. At that time they were forced to close their doors in 1537 when Henry VIII came into power. John Smithwick moved to Kilkenny in the early 1700s and went into the brewing business with Richard Cole. Because of the penal codes Catholics couldn't own property so Smithwick 's name couldn't be on the business. In the late 1700s the Smithwick family could finally add their name to the enterprise. In 1827, Edmund Smithwick finally put the family name proudly over the doorway. At the time of the great famine, Edmund Smithwick joined forces with another brewer, Richard Sullivan, to put rivalry aside and jointly opened a soup kitchen to feed the poor and hungry.
There were several digital portraits in the gallery, each "telling" the story of a segment of Smithwick history. Rich and I found this to be a unique and engaging way to tell the story. I couldn't help but think about current circumstances in education and wonder if this might not be a great way to teach history and other subject matter to school children. Imagine how neat it would be for an English teacher to have an author actually reading her own stories or poems!
We ate that evening in Lanigan's Pub where there was a guitar player playing traditional Irish tunes. The food, as I remember it, was good but the guitar player was wonderful. There weren't many people in there at the time as it was early on a Thursday evening so it seemed like it was entertainment just for us.
After another hearty breakfast be bade Emer goodbye and headed to another fascinating local site before heading on to Bunratty near Shannon where we would stay the night before heading home. St. Canice's Cathedral is an amazing church that has been operational for over 800 years and still holds regular services today. As we wandered through the sanctuary on a self guided tour we marveled at the number of knights, lords and ladies entombed within it. The round tower is the oldest standing structure in Kilkenny city. Rich braved the climb and went to the top of the tower. I chickened out!

The narrow lane beside the cathedral, called Church Lane, is lined with charming  doorways that open right onto the lane. Pots of colorful flowers stand outside nearly every painted door, making this one of the unexpected delights found throughout Ireland.

From here we took a meandering drive to Bunratty, located near Shannon. We had decided to spend the night a bit closer to the airport to lessen the chance that we would miss our flight home the next day. We had booked a room in the Bunratty Castle Hotel, a modern hotel across from Bunratty Castle. The original plan had been to tour the castle while there but, alas, it was not open on that day. No problem, there was a Blarney Woolen Mill store and two pubs within walking distance of the hotel. We had planned on lunch at the famous Durty Nelly's pub but it was so crowded that the wait for a table was too long for a couple of hungry travelers.  So we had lunch at The Creamery Bar just across the street and conveniently located near the small shopping area containing The Blarney Woolen Mill store! After a quick lunch, it was time for shopping. I had already purchased a sweater for Amy along our way,  Christmas gifts for members of the family at Cushendale Woolen Mill, and skeins of yarn at several different places, but I did find a lovely soft sweater for Susie's birthday and a couple more skeins of yarn! Ireland is a great place to find lovely woolen items and yarn.

After shopping we popped up the hill to the hotel to check in. In preparation for our flight the next morning I condensed most of our clothing into a single bag and all of our (my) purchases into the larger bag. I had to quite literally sit on the bag so that Rich could get it closed. I held my breath and crossed my fingers that it would make it home without breaking the zipper. (It didn't, but I didn't lose anything because some thoughtful baggage handler along the way taped it shut before it could come completely unzipped.) After a short nap we strolled down through the lovely hotel grounds to The Creamery Bar for dinner at the pub. All during our meal I kept noticing a gentleman at the bar that looked vaguely familiar. When I pointed him out to Rich, he recognized him right away as Dave, whom he had met at a pub in Kenmare. Dave drives tourists who don't wish to attempt navigation of Irish roads themselves. He is a jovial man who recognized us right away and we were able to get further acquainted with him before we said goodbye to Ireland.
We rose early the next morning and had breakfast at the hotel's elegant buffet before we reluctantly headed to the airport. As the plane took off we could see Ireland and the outer islands disappearing below and both of us agreed that, unlike other vacations where we are eager to get home, this was the first vacation that we really hated to see end. We vowed to return someday.
Posted by Buckeye Star Alpacas at 12:54 PM