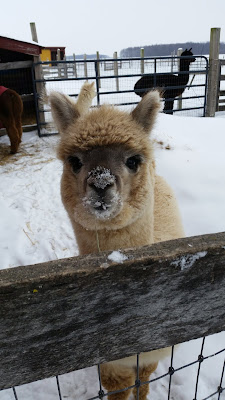 I read in the paper the other day that the Polar Vortex is separating. Apparently the Moroccan heat has come between and separated the parts of the Vortex somehow. According to the article this forced the Moroccan heat north over the Arctic. Although I don't completely understand this colorful explanation I do understand that excessive heat in the Arctic means icebergs begin melting and this is what global warming really means. So although we have had subzero temperatures and fierce wind (more on that later), somewhere very far to the north of us there is ice melting and contributing to the rise of sea levels and displacement of polar bears and other creatures. It's bad for us and really bad for them.

One thing that I quickly learned when I moved to lived in the country eighteen years ago is that out here, chatting about the weather is not merely "small talk." As a city girl, I knew that when the conversation lagged one could always turn to talk about the weather to keep things going. In Ohio, after all, the weather is constantly surprising us. But out here in the country one can see the immediate and direct effect weather has on our economy and our life every day. So when farmers get together the weather is always a topic of conversation. The amounts of precipitation in the winter, snow, rain or whatever form it takes, has a direct effect on the crops that will be planted in the spring.

Closer to home, our alpacas, indigenous to the high planes of the Peruvian Andes, are able to withstand and even enjoy most winter weather. We provide shelter, whether it be our small barn or three sided "condos" (sheds). The animals always have the option to go inside or stay outside and under normal winter circumstances males and females stay outside within sight of each other. Because of their extremely long and dense fleece we have found them kushing in the barnyard with a couple of inches of snow on their backs after sleeping out all night. No problem.

On Saturday night, January 19th we had overnight temperatures sinking to near zero and high winds out of the north, making the wind chill factor well below zero. Our three geldings stayed snug and warm huddled in their condo and all the mamas and babies stayed in the back of the barn, snuggled down in the straw that Rich had spread for all of the animals. Our beautiful black herd sire, Mocha, because he is an intact male, has a pasture and shelter of his own up against the barn. He stayed huddled inside but unfortunately, instead of placing his well fleeced backside to the wind, he faced outward, toward the nearby barn door, where he knew the girls were huddled. It's purely instinct for the herd sire to protect his harem. When Rich came out early Sunday he found Mocha, still kushed and facing the barn door, head encrusted with icy snow, shivering, still guarding his girls.

We had worried about him being alone but felt that his survival instinct would make him sleep facing the barn, rear to the storm. Unfortunately his protective instinct was stronger and he had been looking out for his girls. Of course, Rich, immediately moved the poor guy into a makeshift stall in the barn and hung a heat lamp to help him warm up. His stall was adjacent to the girls' area where he could see them and yet couldn't get in to "pester" them, if you get my drift. Everyone was happy. 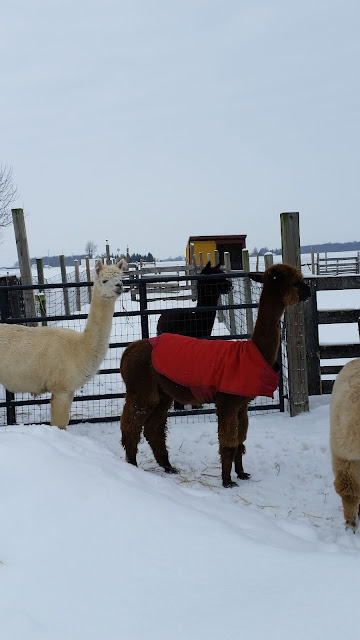 Today the weather channel reports that the temperatures are warming and that we are in for a "thermal whiplash" whatever that is. Mocha has been returned to his own area of the barnyard. The girls have been set free from the barn and the geldings are happily watching them from their adjoining pasture. Everyone is enjoying the great outdoors and the lovely new covering of snow that fell last night.

You may notice that our Leezza has fully recovered from her pre-Christmas bout with anemia and is gaining weight and growing fleece. She has been wearing her red coat to help her retain warmth throughout this cold snap and within the next few days we will be removing it when the temperature rises high enough. He fleece is shorter than usual this year and very brittle as a result of her illness. That means that it will only be useful for felted insoles and not knitting yarn. But we are so glad that she and her little Artemis are thriving after such a close brush with death. 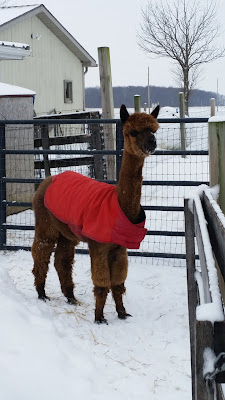 I certainly hope the parts of the Polar Vortex can resolve their differences and get back together, letting the Moroccan heat travel southward to warm us up a bit. I don't know about you all but I am hoping for a cloudy day tomorrow so that old Buckeye Chuck  stays outside to play in the snow and maybe spring will arrive a bit sooner than usual!

Posted by Buckeye Star Alpacas at 9:42 AM