The Rover pipeline, an interstate natural gas pipeline which will transport "3.25 billion cubic feet per day of domestically produced natural gas to markets in the Midwest, Northeast, East Coast, Gulf Coast, and Canada" (quoted phrase from their website) is virtually going through our back yard. For the past few months I have been observing the progress of its installation. After the company settled on a price for the right-of-way, all done through a Columbus law firm that specializes in representation of property owners in pipeline cases, Rover began the survey process. It seemed like only a matter of minutes after my father-in-law, who owns the fields, received the settlement check before the top soil was pushed aside into a series of mounds alongside the route.

Just a quick note here, it's pretty much inevitable that once the pipeline people decide on a route  and get the approval from FERC the landowners have almost no chance of blocking it. Remember the Dakota Access pipeline that is going through the Native American burial grounds and the long drawn out protest through a very cold winter?  So, although I personally am very uneasy with two 42" natural gas pipelines laying side by side just four feet below the surface of the field behind us, we have no choice but to accept it. The deliberations between the lawyers on our behalf and the Rover people went on for almost two years until they threatened to invoke eminent domain. Landowners who hadn't accepted previous offers were advised to sign the final best offer.

After the topsoil was cleared off the heavy grading equipment smoothed out the access area and very soon the semis brought the segments of pipe through and laid them out on timbers. It was interesting to see the giant electromagnetic cranes effortlessly lifting the pipe and laying it in place. One truck after another, each one carrying two pipe segments, drove through the field. Because of the recent rains there was one section of field out by the electrical towers where the trucks got bogged down and stuck. One driver tried to power through it before he finally gave up. A bulldozer came in from the opposite road, hooked up to and pulled the truck out. At one point the dozer pulled three trucks at once. Amazing!

All the while, the alpacas grazed peacefully, only looking up occasionally in curiosity. It seems that as long as they have a fence between them and the noise they feel protected. 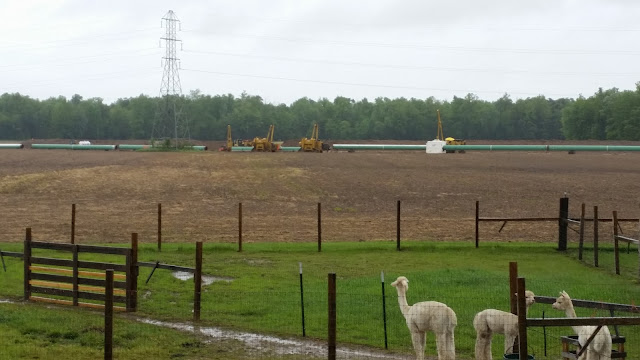 Each day, even through light rain, there was some action going on out there. Then one Saturday when I had been in Columbus most of the day, I returned to find a series of white boxes surrounding some of the joined sections of pipe. Rich and I could only assume that there were welders working on the permanent joining of the pipe and the boxes were there to protect things until it was set. The pipeline workers keep strictly to themselves so there is little opportunity to ask questions of them. I have noticed that most of the workers arrive from the south somewhere and I have seen them on the road that leads up from Rt. 23 and Marion. Also, most of the license plates on the personal trucks parked on the corner construction site are from states very far west and south of here: Texas, Iowa, Nebraska, Oklahoma, etc. So much for the local unions claiming that the pipeline would provide local jobs!

The hole was finally dug and the pipes sunk into the ground in the past week. The ground has been smoothed over and much of the work has moved on to the northwest of us. This process will be repeated one more time for the second pipeline that is to lay beside this one. I'm not sure yet what the completion date will be. In the meantime, life goes on. 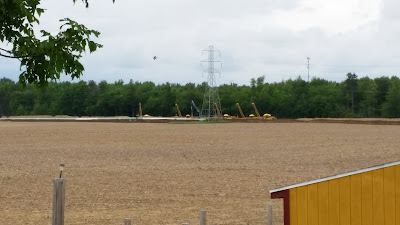 Last Friday, my friend, Liz, came out and we worked all afternoon dying four color batches of yarn. It was an experiment that produced some lovely spring like colors. 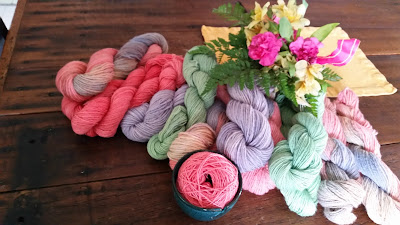 We have a shamrock green that my friend Gabi named "Bit 'O Luck,'" 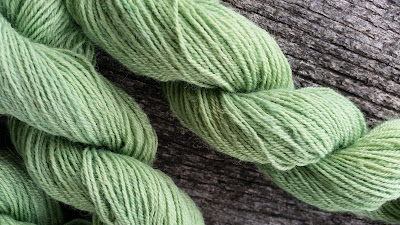 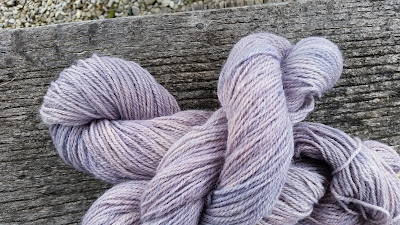 a vibrant orangy-pink called "Sea Coral" by my friend, Marilyn, 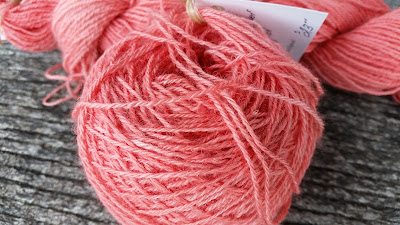 and, finally, a variegated yarn that I call "Sonoran Sunset." 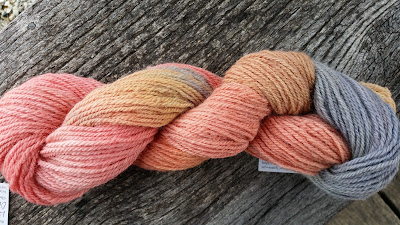 Yesterday I did a day trip with my friend, Lisa, and her son, Darren. We drove down to Somerville to deliver our fleece to America's Natural Fiberworks and pick out the blends and weights for this year's shearing. More about this in another post. Rich and I bought strawberries on Monday so today is jam day. One of my favorite times of the year.
Posted by Buckeye Star Alpacas at 6:33 AM