Imagine the shock when we returned Friday from a week in Savannah, Georgia where it was 70 to 80 degrees each day! Northern Ohio still had traces of the snow that fell the day before and Rich and I had only taken light spring jackets on vacation. Our daffodils, which had bloomed while we were in the south, were drooping their blossoms in defeat from the cold.

Now, two days later, springtime is returning and  it is sunny and supposed to rise to a warm 72 degrees. This morning the ever-hardy daffodils are perking up. The mere sight of these golden yellow beauties makes me smile each year when they bloom in the fence garden out in front of the house.

I transferred my vacation pictures from my cell phone this morning (does anyone use cameras much anymore?) and organized them on my computer. As I labeled each picture I was able to finally reflect on our vacation. Savannah is surely an example of how the modern age meets the "old" south. It is home to one of the largest art schools in the nation, Savannah College of Art and Design, SCAD, and many other industries. SCAD even has a well respected degree in urban restoration and it's students have restored many of the historic buildings in Savannah. SCAD students can be seen everywhere around town working in restaurants and toting their portfolios through the many squares.

The beautiful architecture throughout the historic district lives up to Savannah's reputation for being one of the most beautiful cities in America. It's easy to see why General Sherman, after conquering Savannah, spared it the destruction he wrought on Atlanta and other southern cities and presented it as a Christmas gift in his telegram to President Lincoln. "I beg to present you as a Christmas gift the city of Savannah with its 150 heavy guns and plenty of ammunition and also about 25,000 bales of cotton," Sherman wrote on December 22, 1864. Sherman himself chose one of the most beautiful homes as his headquarters, the Green-Meldrim House.

We traveled by car to Savannah along with Rich's brother, Tom, and his wife, Julie, clowning around along the way at the visitor's center in West Virginia where they had the following picture board: We arrived in Savannah midday last Sunday and drove around to get our bearings before checking into our B&B. After finding a parking spot on Bay street we stopped at the Moon River Brewery where I had a wonderful fried green tomato open faced sandwich smothered in melted cheese. Thus began a week of very fine eating. I will pay for my many indulgences now that I am back home! The brewery is named for one of the songs of Savannah's favorite son, Johnny Mercer. More about him later. After dining we strolled along Bay street and took the elevator down to River Street where we witnessed a couple of freighters and a river boat cruise leaving the harbor. As we strolled along River Street and its myriad of souvenir shops and dining establishments, I couldn't resist snapping a picture outside of one of the seedier establishments and sending it as a joke to my friend, Nancy, who had recommended a place to eat. 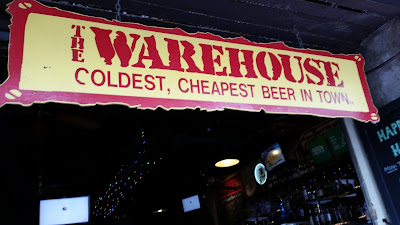 Our party strolled back up to Bay Street on one of the cobble stoned ramps that were constructed in the 18th and 19th centuries out of the ballast stones from the ships of the era. The old River Street Inn  and other river front buildings have  very solid bases of combined bricks and ballast stones. Using the ballast stones as building materials prevented them from being dumped into the harbor or piling up along the shore.

A few weeks before leaving for Savannah, I re-read John Berendt's Midnight in the Garden of Good and Evil, the tale involving real life characters from Savannah's more recent history. In it, the Mercer-Williams house features prominently, so of course, we had to take the tour. This lovely home situated on the west side of Monterey Square was built for the Civil War General Hugh Mercer. The composer of Moon River and other famous songs, Johnny Mercer, never actually lived there. Nor did anyone from the Mercer family since it wasn't completed until 1869. After the war General Mercer was tried (and acquitted) for the murder of two deserters. The General decided that he didn't want to live in Savannah and decided to sell the house. 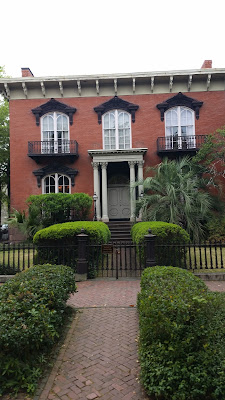 In 1961, Jim Williams, antique dealer and old home restorer, purchased the Mercer house where he lived until his death. In 1981, Danny Hansford, a restorer employed by Jim Williams was shot and killed by Williams in the house. Self defense or murder? Williams underwent four trials for murder before his fortunes were drained and he was finally acquitted. He died nearly penniless but left behind this beautiful home filled with priceless works of art and antiques which his sister occupies today. Berendt's Midnight,  just called by Savannahans "the Book," is the fictionalized story of these events. There are so many beautiful paintings, statues and artifacts that the 30 minute tour was not nearly long enough to see them all.

We drove out to the Bonaventure Cemetery on the one steamy morning of our trip. It was too early in the day for a guided tour so we just drove slowly through the cemetery stopping wherever we saw something interesting. I found it interesting that about one-fourth of the cemetery was devoted to Jewish graves and was even marked by its own entrance flanked with stone pillars, each topped with a carved Star of David. We drove around this side first and then over to the other side. So many of the really old graves were marked by lovely statue type monuments and surrounded by iron fencing. Apparently in the 1800s one showed their wealth by the liberal use of iron in their decoration of earthly homes and final resting places. One of the most captivating monuments is of little six-year-old Gracie who died of pneumonia. The grave is surrounded by a lovely intricate ironwork fence and gate. I took this picture between the bars. You can find her sad story on the internet. 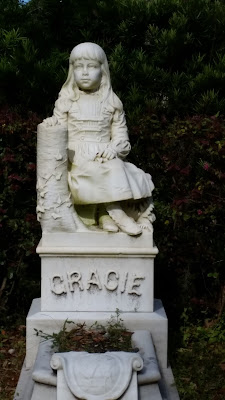 We dined elegantly one evening at the historic Pink House Restaurant. History says that the building was a white stucco over red brick home and that during one of Savannah's several fires, the red brick bled through the stucco turning the house pink. I had pan seared sea scallops and cheesy grits in the most elegant ballroom with Swarovski crystal chandeliers overhead softly lighting our table. Very romantic. 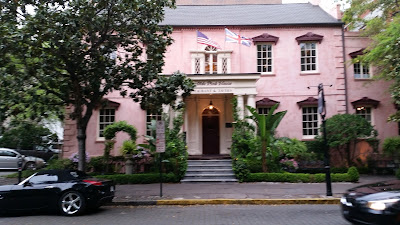 St. John the Baptist Cathedral was one of my favorite spots in Savannah. The Cathedral itself was impressive with the hand-carved Stations of the Cross running along each side of the sanctuary and the lofty ceilings overhead. I almost missed the mosaic interior of the baptismal font until I leaned over and peered into its depths as I was about to leave the church. The gilded Celtic knot in the bottom glowed out from the holy water as if it was lit by the holy spirit. Maybe my most favorite sight of the entire trip. My photo doesn't do it justice. 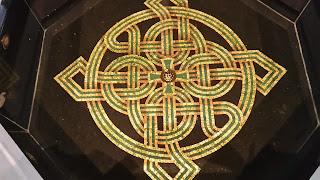 Our last evening meal was at the Six Pence Pub made famous in the Julia Roberts movie, Something to Talk About. It's in the scene where Julia Roberts peers into the window only to see her cheating husband with another woman. However, it is a charming place to dine in the traditional English pub atmosphere. I had crab,scallop and shrimp stuffed flounder and Rich had a Guinness braised pot roast. Both yummy. 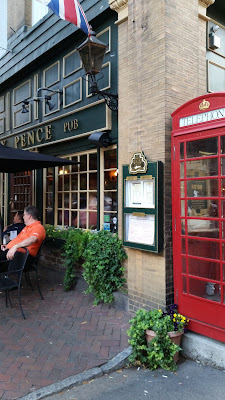 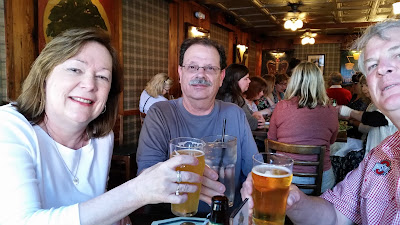 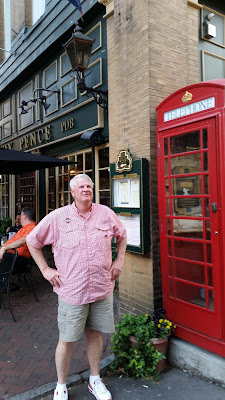 Our party decided by mutual agreement to fore go breakfast at the B&B on our last morning. We had passed a charming looking little cafe around the corner several times during the week. Clary's was the type of place that looked like it was frequented mostly by local people. Rich decided to have dessert for breakfast when he saw the description of something called the Peach Blossom. We hadn't had anything with the traditional Georgia peaches on our trip so Tom ordered one, too. By the ornery look on our waitress's face we should have known that something was up. When the dish arrived at our table even Rich, who has a voracious appetite for sweets, was taken aback by the size of it. The waitress asked Tom, who was already tucking into the breakfast in front of him, if he still wanted his peach blossom. He didn't back down. After delivering a second dessert to our table the cook had to come out from the kitchen to see if the crazy tourists were actually finishing the food. The four of us couldn't finish the two desserts but it made for great conversation with all of the Clary staff! 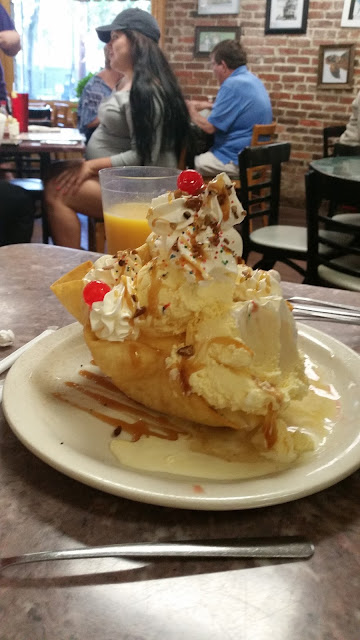 A short walk back to our townhouse and we packed up and headed north for an uneventful but gradually colder ride home. Rich and I dropped Tom and Julie off in Dublin and sped up Rt. 23 towards home. Although I love traveling I always enjoy arriving back home. Our puppies are glad to be sleeping back in the house again instead of outside where they reside sometimes when we're gone. They missed us, can't you tell? 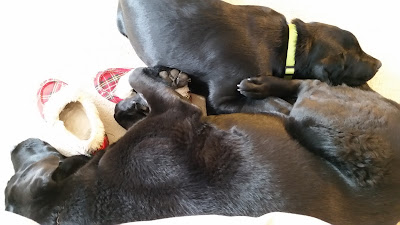 Posted by Buckeye Star Alpacas at 8:53 AM