Where Did the Summer Go?

For the entire summer I feel like I have been living in some surreal, tornadic existence, like Dorothy looking out the window of her whirling home seeing familiar beings, strangely out of place, flying by in the storm. Just now I looked out my front door and watched the combine across the road spewing a waterfall of ripe, golden corn out of the chute and into the waiting wagon. It's fall again! Where did the summer go? 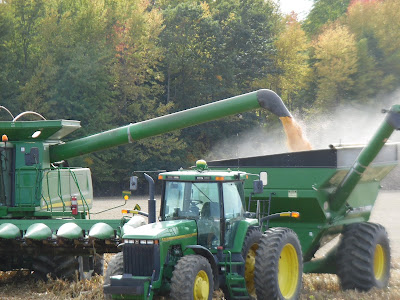 Early this summer I was with  my beloved mother-in-law, Delores, at her doctor appointment when she was informed that her pancreatic cancer from last year had returned and nothing could be done about it. Terminal cancer. Two words that no one ever wants to hear, much less talk about. The following week Delores and I were sitting at her kitchen table talking with a hospice nurse, outlining Delores's wishes for how she wanted to live the end of her life. That's the point at which I became her "primary care giver" and the rest of the summer took a back seat to what was happening.

I was so privileged to be able to help Delores and in doing so get to know her much better. I was so lucky to have her as a mother-in-law and during this process I was even more fortunate to get to know her on a woman-to-woman level. We buried her last week after a very personal service by her pastor, who had known her since his childhood. The service was held in the same small town church that Delores had attended since her marriage to Ed over 65 years ago.

In a happier vein, we had our annual National Alpaca Farm Days open house in September and as if we had planned it, two of our alpaca girls gave birth the same weekend! Our beautiful brown, Leezza, who we had tried to breed many time in the past couple of years without success, gave birth right on her due date, Friday, September 23rd. She had an adorable, light fawn colored, male, cria that we named Aristotle. Ari for short. Ari was 15 pounds at birth and has grown steadily since. He is smaller like his mama and has a delicate, inquisitive face. 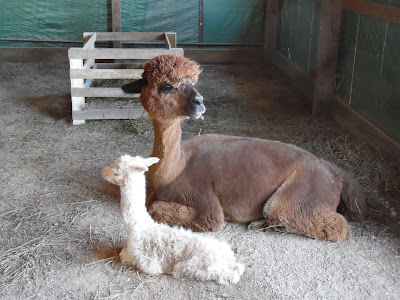 Leezza has proven to be a very good mama in spite of her inexperience. During his first days she often would look at Aristotle when he was nursing as if she couldn't believe what she had done. She is very protective of the little guy and if he strays too far away from her she still makes that characteristic clicking noise in the back of her throat, calling him back.

The very next day, just 15 minutes before the start time of our first open house day, Mango gave birth to her third male cria in three years. Apollo weighed in at 20 pounds; 5 pounds heavier than his cousin. That morning early, Darren Wurm and his mom, Lisa had come down to set up for the open house. Rich and Darren had brought two of the Wurm's animals down, Dora and her little month old, Aggie. We were finished setting up and taking a breather before the guests began arriving when Lisa yelled, "Mango's pushing!" 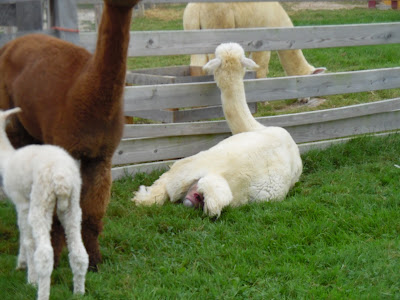 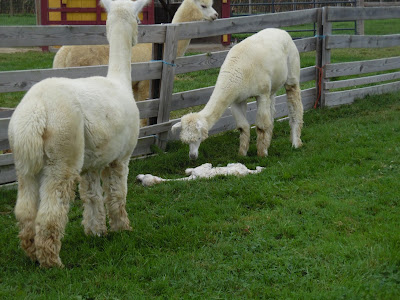 I ran back around the barn to see what was going on and sure enough, I could see the "bubble." When alpaca's give birth the first thing you should see is a bubble of membrane with a little nose clearly visible inside. The cria's nose was breathing in and out, a sign of a healthy birth. It didn't take long until the bubble burst and the nose and two little front feet emerged. As soon as his head and front legs were free, the little guy started trying to get traction with those feet and pull himself out. The birth didn't take more than 20 minutes and by that time our first guest had arrived and was treated to the sight of a still wet, newborn cria. She was thrilled to have been on site to see this.

Within minutes of his birth, Mango's cria was attempting, clumsily, to stand up. This feisty little guy earned the strong name of Appollo. Appollo has a very bright white, dense, crimpy fleece and has a tendency to be very nosy. Like his cousin, Ari, he is gaining at a rate of a pound each day since he was born. 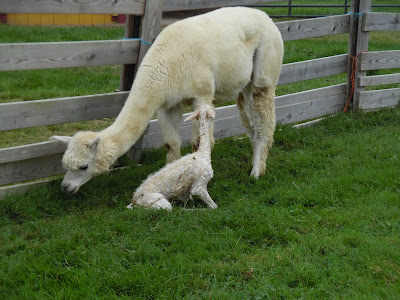 The two little guys have been great companions in discovering the far reaches of the pasture. I just love to see them gaining confidence in their explorations. Often, as if by mutual agreement, they break into a run along the fence line and circle back around the perimeter of the pasture. After exhausting themselves they are usually ready for a roll in the dust or a little snack from their mamas. 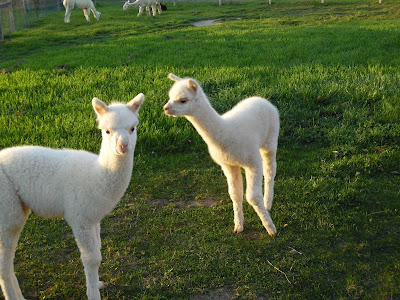 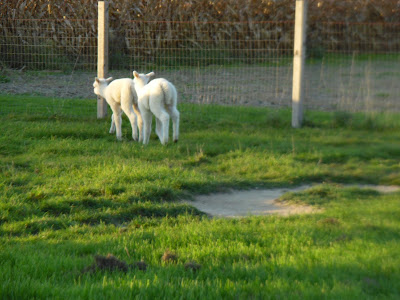 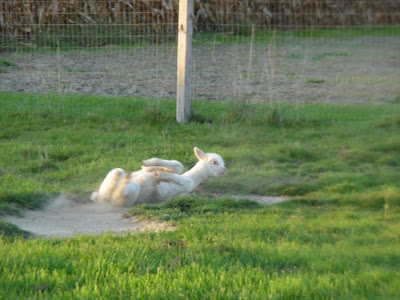 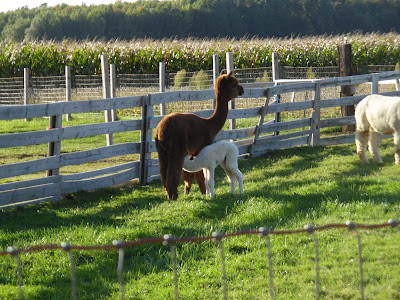 Our remaining female, Took, the grande dame of the herd, was due to have her little one this past Friday. If you remember from my posts last year, we waited and waited for her to deliver only to discover that she had a false pregnancy. She is very large and uncomfortable right now and spends her time laying in the sunshine each day. Since she spits at Mocha when he gets too near where she is laying by the fence, I am still hopeful that she will deliver a baby soon. Especially hopeful that maybe she might deliver a female cria since the last six babies born on the farm have been males! However, I am tempering that hopefulness with the still fresh memory of last year.

(Just a note to those who were looking for us at the Garlo Nature Preserve Octoberfest and the last couple of Tiffin Farmer's Markets, family circumstances prevented us from being tied up away from home all day. Sorry. We are looking forward to next year's events.)
Posted by Buckeye Star Alpacas at 3:26 PM