Waiting (not so) Patiently.

Our Took has been pregnant for one year and eleven days as of today. I have been increasingly more worried about her even though she hasn't shown any signs of distress and when we put her in with Nikko last week she violently rejected him, indicating that she is still pregnant. I had called the vet on Monday and she advised me to wait until the end of the week. I haven't seen any signs of activity by the cria in almost two weeks so the vet came out this morning around 10 a.m.

I harnessed up Took and held her while Dr. Sabrina checked her temperature and did an exterior ultrasound. The imaging showed a fetus in there but it was difficult to determine if there was a heartbeat. After some deliberation in which Dr. Sabrina put forth my options I made the decision to go ahead and try to induce labor, with the understanding that we may have a stillborn cria. At this point I just don't want to have to put another mama down because the cria inside has gone toxic and infected her.

Dr. S said to give it 24 hours and then to call if nothing has happened by tomorrow morning. I have been checking Took every hour on the hour since then and four-and-a-half hours later  she is still peacefully munching hay in the barn or hanging out in the barnyard. She doesn't seem to be distressed in any way. I wish I could say the same for me. 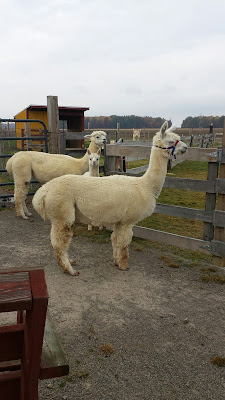 Our friends Lisa and Darren were down after school yesterday to visit little Dionysus. The little guy is growing like a bad weed. When Darren, a high school freshman, who is much younger and stronger than I, is handy I have him pick up little Dio and step on the scale with him. As of yesterday afternoon, Dio is 45.5 pounds! The little man is still nursing frequently in addition to grazing in the pasture and chomping hay in the barn. The frisky little guy is always jumping on his mama, Mango, and grandma Took. Mango is a patient mother but Took air spits and air kicks at him to warn him off. As pregnant as she is it's no wonder that Took is a bit testy. 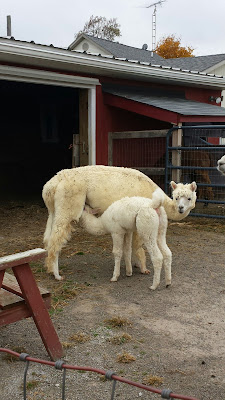 I'm still taking pictures with my cell phone since no one has found the camera that I lost at the Garlo Octoberfest. I guess it's about time to start checking out new cameras.