Mango Did It Again! 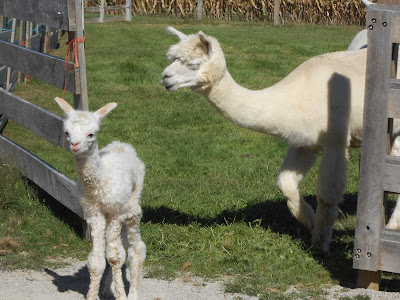 And by it I mean, she not only had another boy, but she also had him a mere 30 minutes after I had checked on her and found her peacefully grazing. I was only on the other side of the barn in the store working on a painting project, too! Darn. I still haven't seen an actual birth.

While the odds were in our favor to have a girl, since the other three babies born on the farm have been boys, we are still thrilled to have a lively, healthy little boy. This one has the longest legs that I have ever seen on a cria, which probably explains why Mango stuck out so far on each side of her belly. This new little guy began nursing just minutes after I had picked him up to determine his gender and dip his naval in some iodine to prevent infection. I no sooner put him back down than he ducked under his anxiously waiting mama to begin nursing. 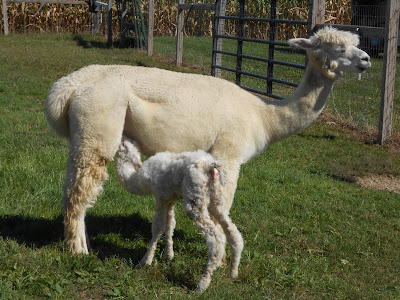 Mango tolerated this for a while but as soon as he let go she began grazing herself. The poor girl seems to be starving. A bit later I will go out and give her a special treat as a reward for her good work. 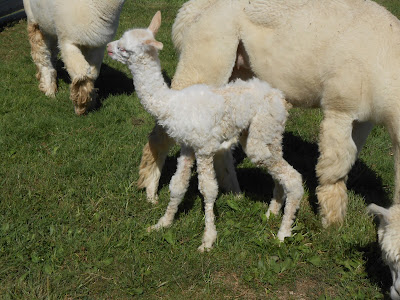 This is just another added attraction for our fall open house during National Alpaca Farm Days on September 26th and 27th. Be sure to come on out and see this new little one. We will be open between 10 a.m. and 4 p.m.

Yesterday I made a road trip with my friend, Rhonda, down to a new fiber mill in Somerville, Ohio. America's Natural Fiberworks. Carrie and Robbie, who also own a herd of alpacas and some sheep, were so helpful and showed us around their operations. They are going to turn some fleece that was given to me by another herd owner into lovely alpaca rug yarn and lopi. I have completely sold out of my 2014 and 2015 rug yarn and last years lopi bulky. The samples of their yarns and felt sheets were so lovely. I can hardly wait until mine is done. I have already booked a  spot for next year's fleece crop since they are so busy.

I have been wanting to try my hand at dying some of the white yarn that I have in stock. Last year I had an abundance of white worsted so I pulled five 250 yard skeins from my stock and brought them in. My plan was to dye them a light orange but after reading the dye instructions I was afraid that I had too much yarn in the pot for the amount of dye called for. So, of course, I dumped a bit more in the mix. It soon became apparent that I had perhaps overdone. The yarn just kept getting darker and darker. When the process was finally done I ended up with a flaming red-orange yarn. It's not the light orange that I had planned on but since it perfectly matches my crop of fresh tomatoes and the salsa I made from them.... 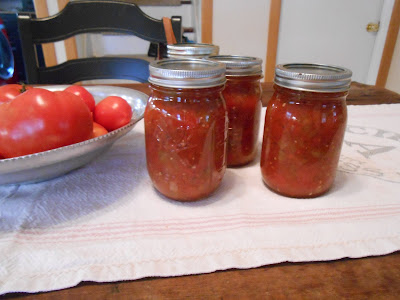 I'm debating about whether to call the yarn "Summer Tomato" or maybe "Salsa." What do you think? 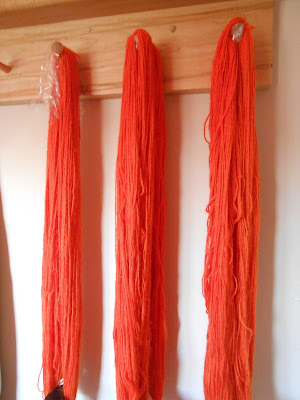 Another reminder, come on out to see us during National Alpaca Farm Days, on September 26th and 27th.
Posted by Buckeye Star Alpacas at 9:43 AM