A Crowded Pasture and One Un-Lucky Nikko!

Back on June first when it seemed like summer stretched endlessly before me, I felt like I had so much time to do all of the nice weather activities that I had planned. Then all of a sudden the back-to-school ads started appearing in the papers and on television and then today I got a catalog with Halloween decorations! As much as I love fall, I am not ready to leave summer behind.

On the plus side, I have completed quite a few warm weather tasks. I got much of the indoor painting completed and have done my second annual spinning demonstration at the Crawford County Fair alpaca show. That's a job that's not really a job. I love seeing so many 4-H girls and boys who are so enthused and dedicated to raising and showing alpacas. So many of them enjoy watching me turn the fleece into yarn; and I like to be able to show them that the beautiful fleece goes on to become something warm to wear.


Rich and I  also joined the local produce farmers at the Tiffin Farmers' Market on Saturday, July 25th. We had only signed up to do one Saturday just to test the waters and see whether our farm products would sell. We had such a great time and sold so much of our yarn and small wood products that Rich is going to be there again this Saturday! This market on August 8th is a big one because the Tiffin Art Guild has it's annual show on the old courthouse lawn at the same time. The hours have been extended to 9-4 because of the art show. Be sure to stop by and visit our booth and say, "Hi," to Rich.

Yesterday, I hosted a group of women from the Findlay International Womens' Group, their children and my granddaughter, Olivia, and a few of her friends. In all, there were about 20 guests visiting the alpacas. My friend, Athena, had organized the event and had turned it into a pot luck. What an extraordinarily  yummy pot luck it was, too! We had everything from caprese salad, with tomatoes and fresh basil from Athena's garden, to home made sushi rolls that Yasuko made for us. There was a home made queso dip, chinese noodle salad, lamb meat loaf with Indian spices, American mac 'n cheese and potato salad, snickerdoodle cookies and ice cream. I have definitely got to get those recipes. Everyone left some of the leftovers for me so I didn't have to cook dinner for Rich and he got a gourmet meal anyway!

The children had such a wonderful time with the alpacas and gave them so many alpaca treats that the animals eventually quit eating them. Alpacas, unlike humans, know when they have had enough! Nikko was very free with his alpaca kisses and gave as many as were asked for. He's always willing to spread the love around.

I did a quick weaving demonstration for my guests and they were able to see how I turn rags or alpaca rug yarn into lovely, useful throw rugs. 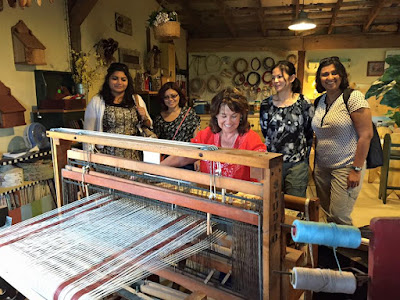 I had put out the corn hole game, sidewalk chalk, bubble blowing equipment and squirt guns for the kids to play with when they got bored with adult company. After lunch the littlest ones made good use of the squirt guns and bubble stuff. It was perfect weather for outdoor fun and great pictures. 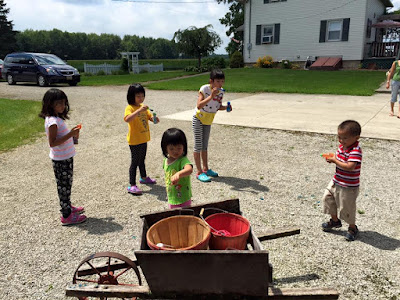 Olivia has plans to bring her girlfriends back in a couple of months after the new babies are born and one of the girls asked to bring her grandparents up to see the herd. Of course, Rich and I love hosting visitors to the farm and are looking forward to their visit. 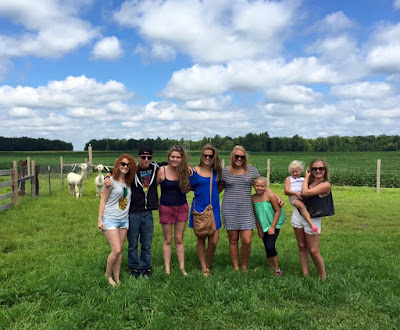 I have mentioned before that alpacas are pregnant for 11-1/2 months, give or take a week or two. They don't even look pregnant until the very end of their term. Well, our girls are looking really big in the past week or two. Took is due on September 20th and I have actually seen some pushing and pulsing in her belly area. One has to sit on the ground nearby and focus on the rear part of  her underbelly in order to be lucky enough to see anything...I know, picture this, right? But one evening I was leaning over to pick up something from the ground and thought I saw a motion. So I plopped down on the ground and stared for a few minutes and sure enough, "punch, poke, kick!" Tookie kicked with a back leg in the direction of the motion, clearly irritated with whatever it is in there that had interrupted her peaceful grazing. 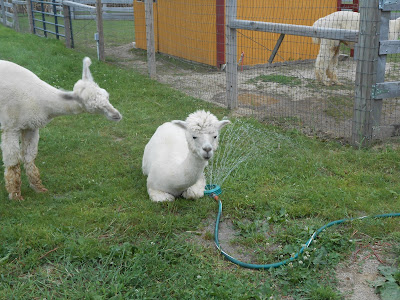 Mango is due on September 29th and is beginning to be uncomfortable enough that she kushes with her back legs to the side instead of directly underneath her. She twists and turns those back legs constantly when she is kushing in the pasture. Both Mango and Took jostle each other trying to be the first one in the sprinkler in the evenings when Rich puts it in the pasture for them. In the picture, Took seems to be asking Mango, "When do I get a turn?"

We have moved Leezza into a separate pasture with Mango's baby, Mocha, in order to help him separate from his mama. He had self weaned several months ago but was still clinging to Mango's side too often. Since he hung out with Leezza when Mango wasn't near it seemed logical to pair the two of them in a pasture. I hated moving him but we had to break that bond before she gives birth to the new cria. Now we have some decisions to make about Mocha. He can't stay with Leezza indefinitely because she is due on October 9th. He is related to all of our females and Nikko isn't about to share a pasture with him or any other male. This means we need to sell or neuter Mocha or find pasture space for him to be alone. Is there anyone out there who would like to buy a beautiful, bay black yearling? It would be a shame to neuter him because he is a show quality animal. What a dilemma. 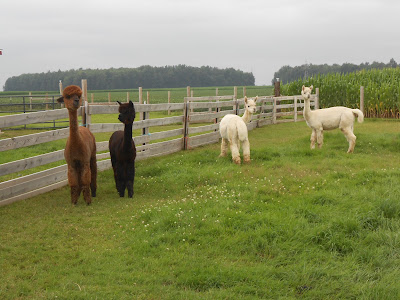 You know how I said that Nikko loves to spread the love around? Well last week our friends from Grass Run Alpacas, Myron and Rhonda, brought Lucky Charm, a lovely black alpaca with a cute white face up for a "date" with Nikko. He was eager to show her a good time and tried to "welcome" her to his barnyard. Poor Nikko! It turned out to be the date from...well, you know. Lucky Charm was having no part of it and she ran from him and spit in his face whenever he got near to her. It wasn't just a warning spit either. This was more than the "air spit" or the "grassy mouth spit." This was what I call the Category 3 spit that comes from the ruminant chamber of the alpaca gut, and boy is it stinky. She got him right in the face several times and he backed off to the opposite side of the pasture and wouldn't go near her. 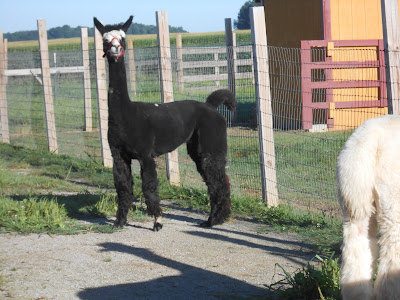 Myron and Rhonda left Lucky Charm with us for a couple of days so that we could try to pair the two animals off again. No luck! On the second try when we put Nikko into the barnyard with her, he took one look at her and cowered at the opposite side of the yard. She spit anyway! When we opened his pasture gate he didn't waste any time going home. In short, Nikko "didn't get Lucky."