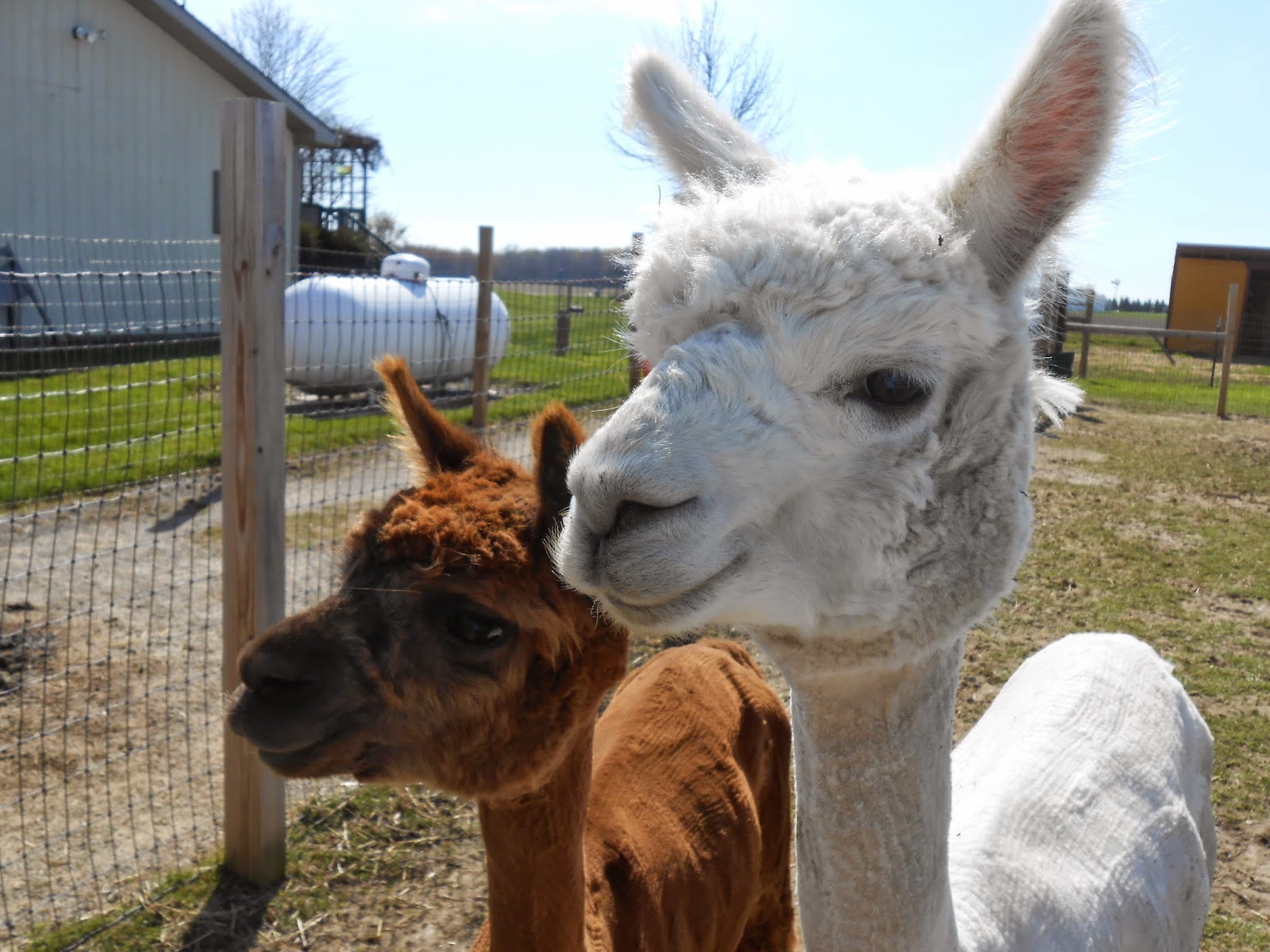 Asterius and Brutus, our two star attractions when visitors come to the farm, will be leaving us tomorrow. Although I knew someday this would happen, I get tears in my eyes when I think about it. They were our first born-on-the-farm crias and have been a big hit with everyone. These two little guys rush to the fence every time a vehicle turns into the driveway and always have a "nose kiss" ready for anyone willing to lean over and receive it from them

Asterius was born on August 8, 2013 to Our Peruvian Took, otherwise known as Tookie, one of the first alpacas that we purchased to begin our herd. His arrival came as a surprise to Rich and I because we didn't really expect him for a couple of more weeks. After a Sunday excursion with two of Rich's brothers and their wives, we returned home to see our three females surrounding a tiny mound of wet, white cria in their pasture! 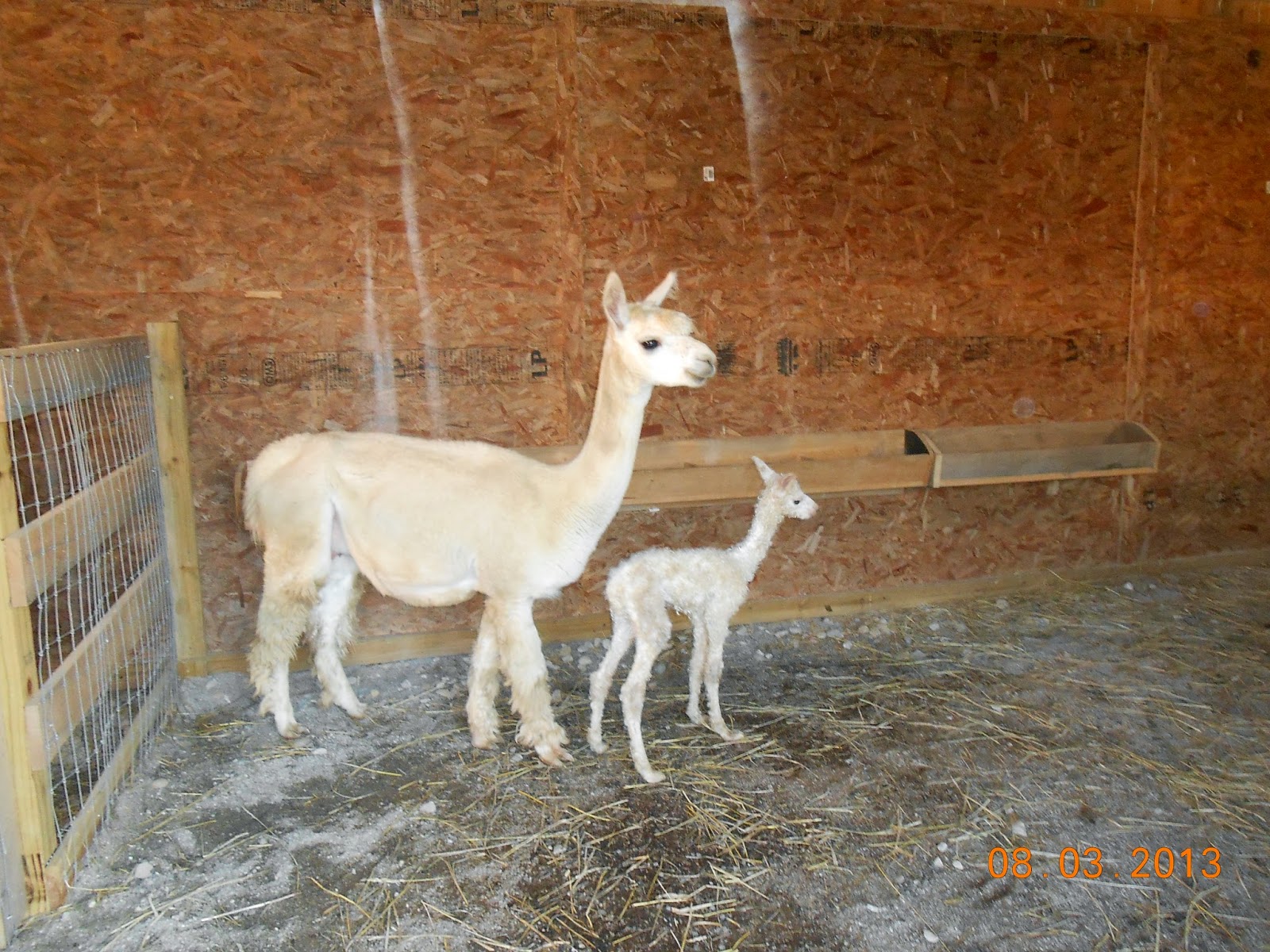 Asterius was such a scrawny, leggy little thing that it is difficult to match that up with the sturdy, ultra-fluffy guy he is now. The first week after his birth we had to bottle feed him because his mama, Took, had a minor clog in her plumbing. Rich would hold Asterius on his lap while I fed him the bottle and his mama stood nearby making that particular clicking noise in her throat that helps the cria identify  their parent. 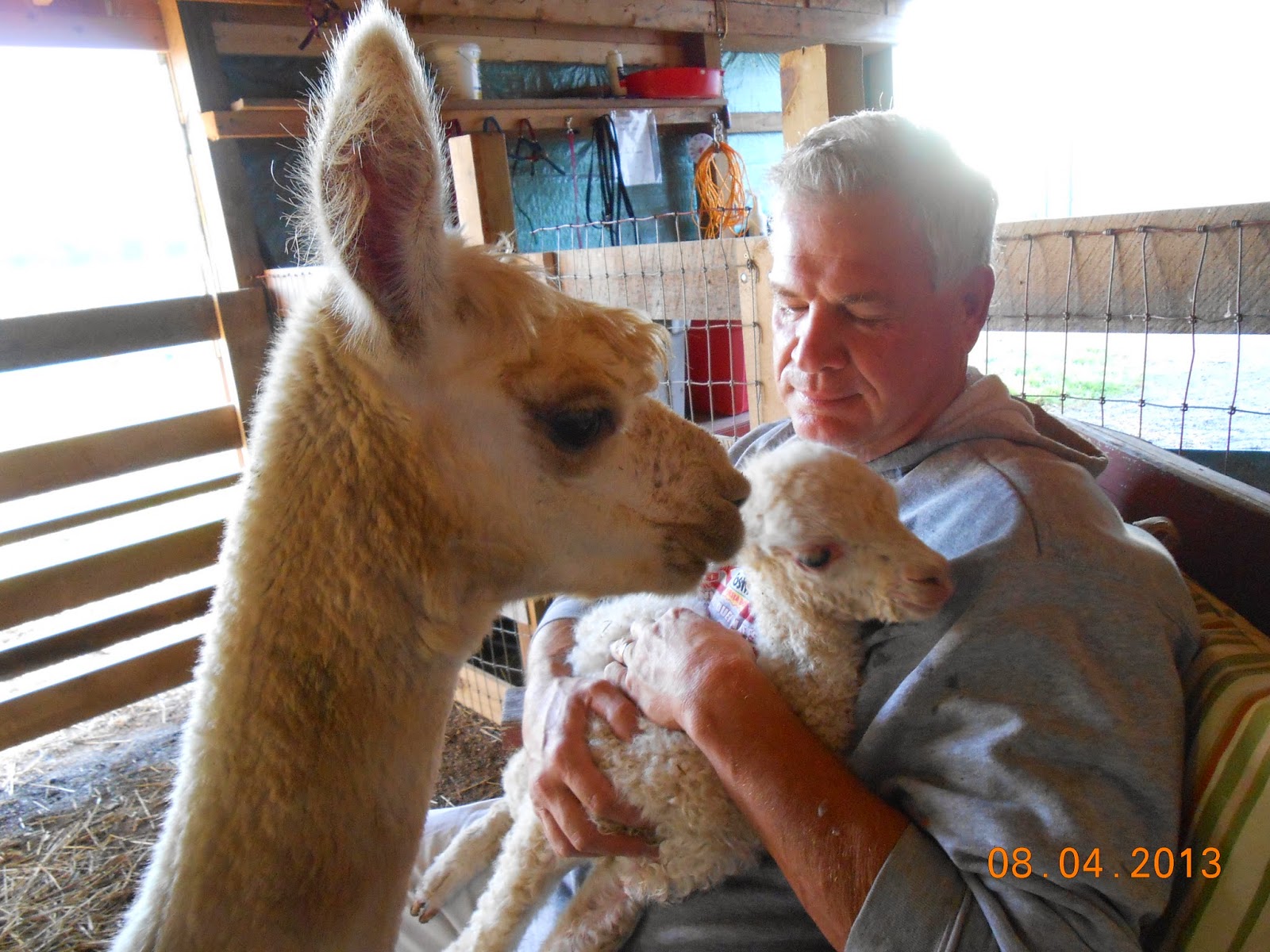 He was so tiny that even I could pick him up in my arms. 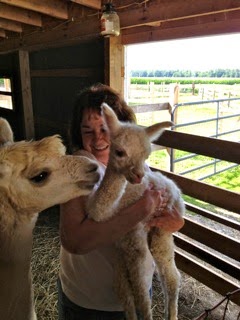 Brutus was born barely a month later on September 5, 2013, to another of our foundation herd members, Firenze. Firenze, a beautiful black and very regal animal, was a slightly older animal with a history of being a good mama. The day Brutus was born I had returned from teaching a class at a nearby university as usual. Knowing that Firenze was due any time, I checked out the pasture behind the house where we had our mamas before going inside to change and grab some lunch. Firenze wasn't showing any signs of labor and seemed to be grazing calmly in the pasture. When I came back out on the deck about 45 minutes later she was still calmly grazing only there was what looked like a little brown pile of rags beside her! 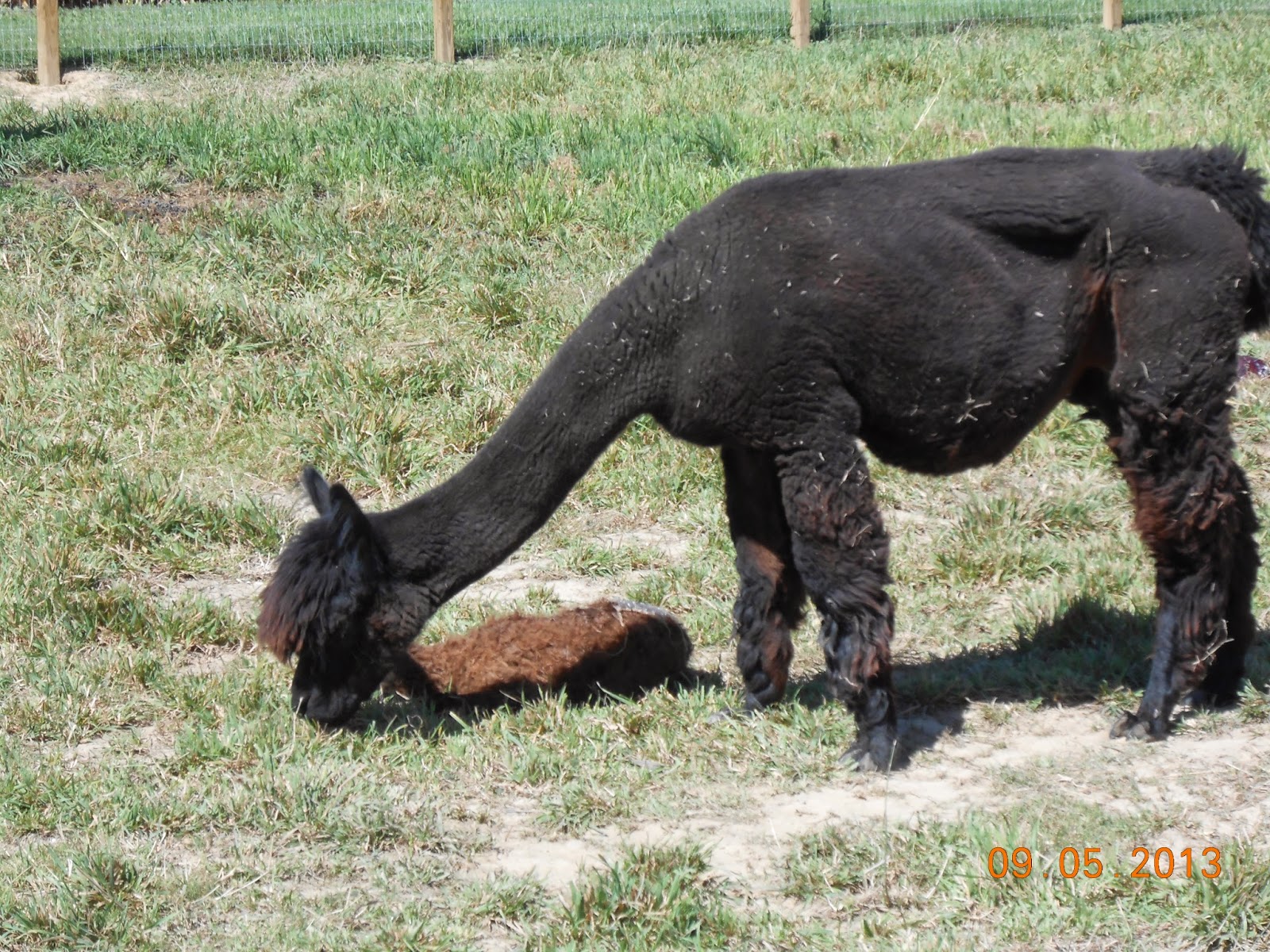 Since this cria was born in Ohio at the beginning of football season, Rich felt that it was only logical to name him Brutus. Firenze, true to her reputation, was a good mama who was always nearby as her baby learned to navigate the pasture and stand up to the one month older and bigger, Asterius. 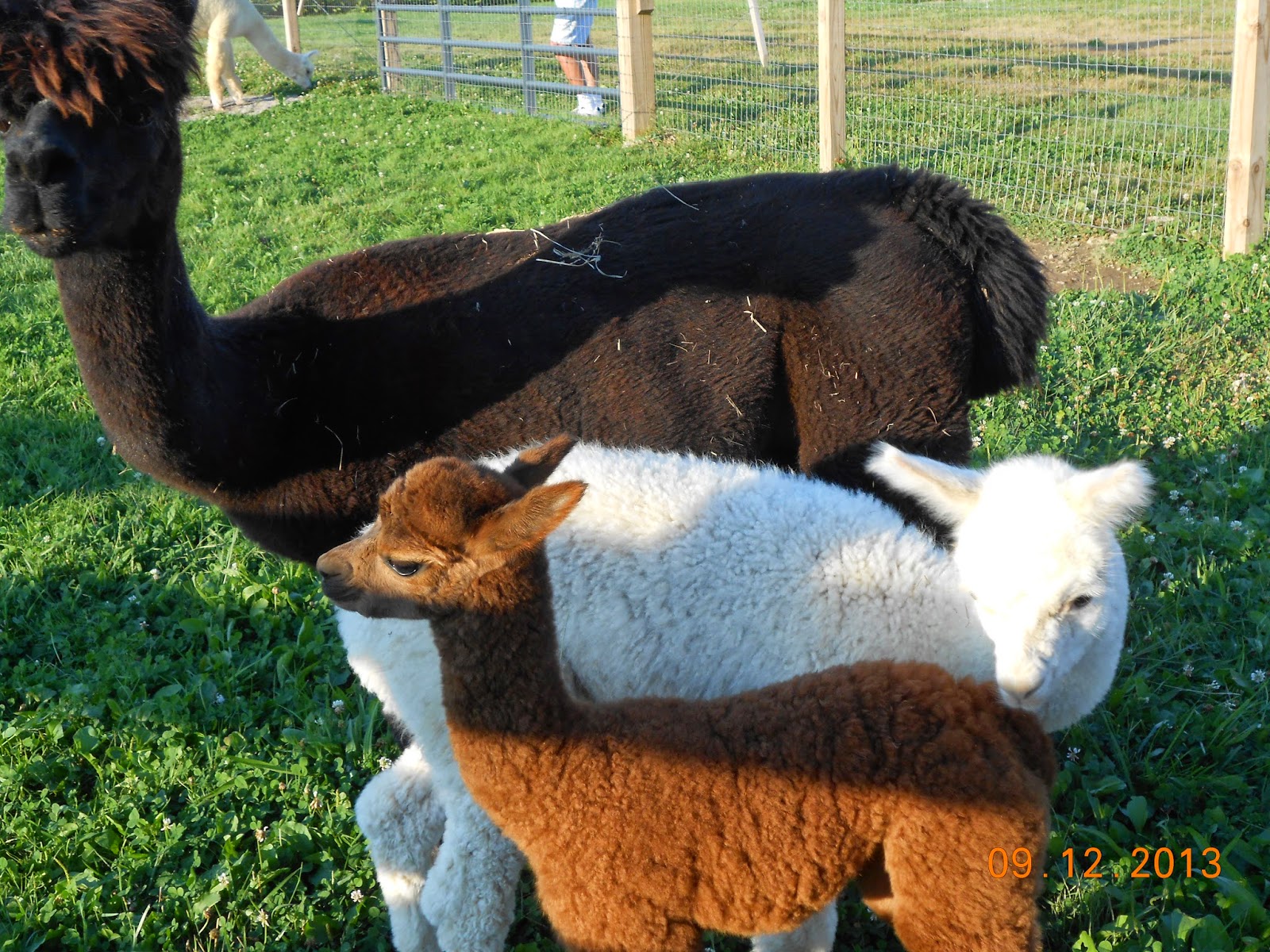 We noticed that Brutus began grazing in the grass and eating hay at the age of two months, while Asterius was still relying solely on his mother for his nutrition. We didn't think that this was strange because Brutus still nursed regularly, too. Firenze was still very thin but her health records showed that she always had trouble putting on weight after giving birth. Then one very cold January night when Brutus was only four months old, I found Firenze "down" in the barn. Even though the vet came out and administered a couple of shots out of desperation (ours) our beautiful, queen of the herd, Firenze died during the night. A necropsy showed that she had been sick for a very long time and the vet said that he was surprised that she even got pregnant, let alone carried a healthy baby full term. His nursing was probably just a comfort thing because Firenze's milk had clearly dried up. Firenze managed to stay alive until she was confident that Brutus could survive without her. Although small for his age, Brutus has no health problems and has thrived through it all. 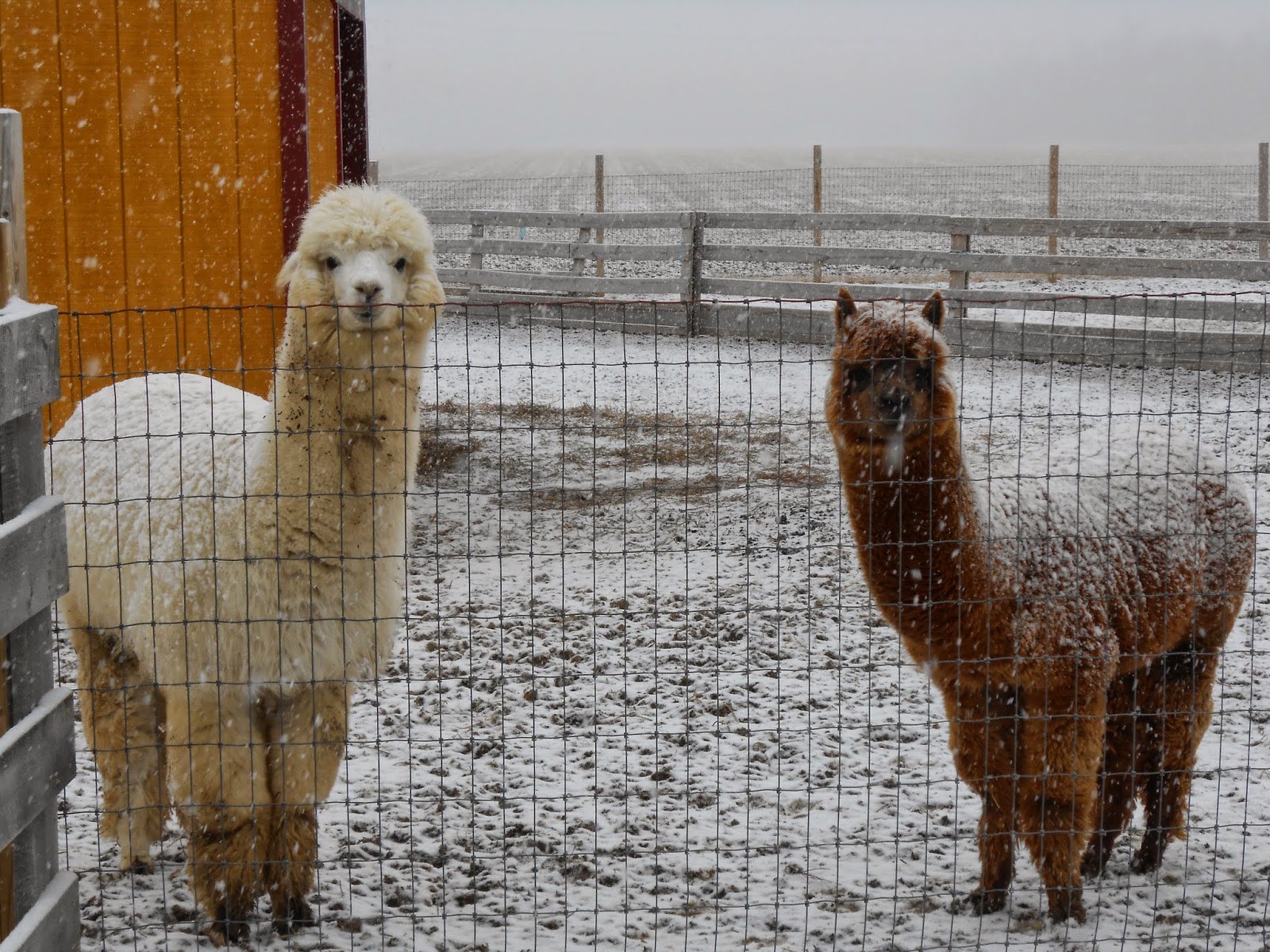 So these two pasture mates who are, unfortunately related to all of our herd females and cannot be bred to them, had to be sold. I knew it was a part of being an alpaca owner and breeder and that selling them is the responsible thing to do. I've watched these two pasture buddies chase each other around the pasture, chest butting and neck wrestling. I've seen each spitting warnings at the other when they get irritated and want to be left alone. For the past 19 months they have entertained each other and entertained Rich and I and our visitors. They live just steps from my back door and I can see them when I look out of any of my back windows. When I return home and pull into my driveway they come to the fence to greet me. To say that I'm going to miss them is a massive understatement. 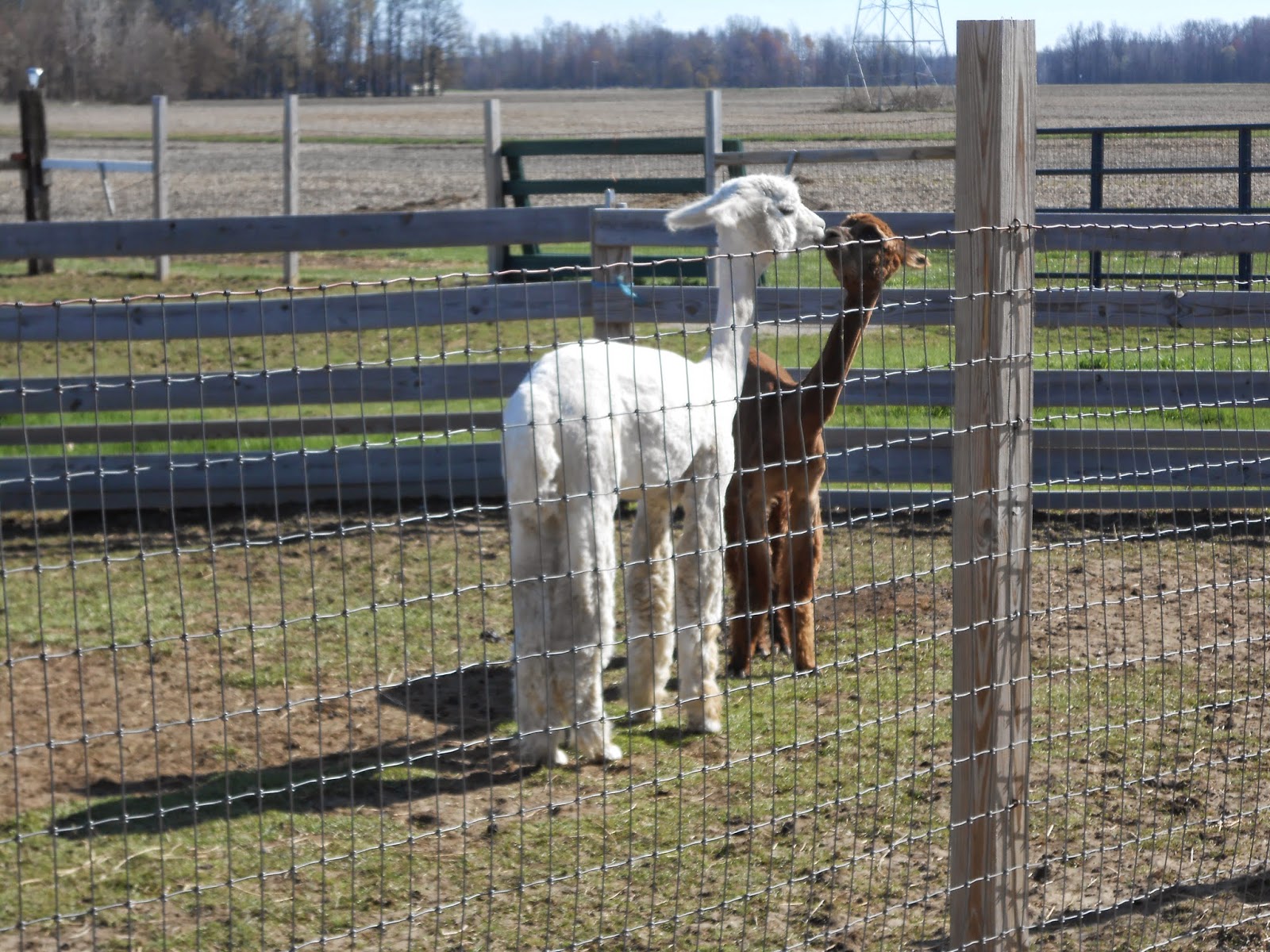 I've spoken to the new owner, Jennifer, who is an animal lover and excited to be adding them to her menagerie. She already has a few alpacas, a cow and other animals. I get a sense that she will love Asterius and Brutus as much as we do. She has promised to post pictures of them on her Facebook page so that I can be reassured that they are doing well. Even so, when we hand them over tomorrow morning I can't promise that I won't cry.
Posted by Buckeye Star Alpacas at 11:48 AM